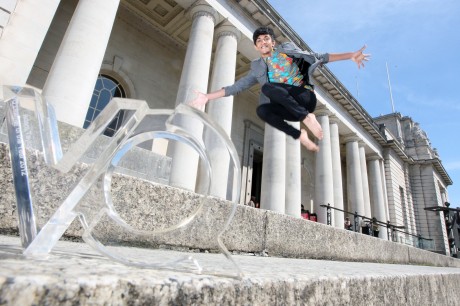 A real life ‘Billy Elliott’ from Bridgend who has set the dance world alight with a talent and commitment his college tutors had rarely witnessed before, has won a Wales-wide award for his efforts.

Adam Taylor, 18, from Bridgend, has been named Vocational Qualification (VQ) Learner of the Year, an award held annually to mark VQ Day (20 June), and celebrate the achievements of those who have excelled in practical and work-related learning.

Adam was commended for his enthusiasm and passion for dance, something which has already won him a number of accolades both at the national Eisteddfod and on Channel 5’s ‘Don’t Stop Believing’ programme. The youngster has also been recognised with a £60,000 scholarship to a prestigious London dance school.

Adam beat off stiff competition from five other learners from across Wales, each shortlisted for their commitment and talent shown while gaining vocational qualifications from colleges and training centres.

The budding dancer was presented with his award, by ex- rugby star Jonathan Davies at a high-profile awards ceremony held at the National Museum of Wales, Cardiff to celebrate VQ Day.

Speaking of his VQ Learner of the Year award, Adam said: “I’m delighted to have won the award, it was a massive shock but I’m really pleased.

“I started dancing at the age of 12 and fell in love with it, a few people said they thought I had the talent to turn it in to a career so decided to go for it and enrolled at Bridgend College.

“While I was there my tutors suggested I apply for the Bird School of Performing Arts in London, there were over 20,000 applicants but I was one of the lucky ones awarded a scholarship and I am loving every minute.

“After I’ve finished training I’ve set my sights on performing in the West End for a few years but then I’d love to come back to Wales to set up my own dance school in Bridgend.”

Eighteen year old Adam was nominated by his tutor at Bridgend College where he has impressed with his commitment to learning, through which he claimed a triple distinction in Level 3 Diploma in Musical Theatre.

Following show-stopping performances in ballet, jazz, tap and hip hop dance the Bridgend teen has been awarded with a £60,000 a year three-year scholarship at the world-renowned Bird College of Performing Arts in London.
Adam has also shot to fame on the small-screen through his membership of the TrueDynamix vocal dance group which reached the final of Channel 5’s talent search programme, ‘Don’t Stop Believing’

VQ Day is held annual to celebrate the success of tens of thousands of people across Wales who successfully achieve vocational qualifications, in a wide variety of subjects such as carpentry, beauty therapy and childcare. It is organised in Wales by Colegau Cymru and the National Training Federation for Wales with the support of the Welsh Government and part financed by the European Social Fund

Deputy Minister for Skills, Jeff Cuthbert, congratulated all the finalists on their achievements, commitment and talent that sets them apart from their peers.

He said: “I would like to congratulate Adam Taylor for winning this year’s award. He and all this year’s finalists have proved you can go a long way with vocational qualifications and I hope their stories will be an inspiration to others. Vocational qualifications often don’t enjoy the high-profile they deserve but they are immensely valuable in preparing people for successful careers in many different fields. The quality of this vocational learning, as demonstrated by these outstanding people, is a cornerstone of Wales’ future as a competitive economy.”

The five other finalists were aspiring engineer Scott Kihlberg, 22, from Penarth, children’s care and development worker, Sian Preddy, 37, from Bridgend, who overcome profound deafness to achieve top marks in her foundation degree course.

Also in the running was rising hair and beauty star, Charlotte Nicholls, 22, from Wrexham, trainee sports coach and high jumper, Sian Swanson,19, from Newtown, and butchery wizard, Tomos Hopkin, 18, from Pontardawe.
Their success stories represent those of hundreds of learners across Wales who are pointing the way for the growing number of young people in Wales who are opting to pursue vocational learning each year.

Mr Davies said: “The importance of learning vocational skills can’t be underestimated, I’d urge learners and young people in Wales to maximise opportunities for practical learning and hands-on training, the working environment instils confidence and self-esteem while providing the ability to deal with people from all backgrounds.

“I’m delighted to be the Ambassador for VQ Day in Wales and to host the awards ceremony. It was an honour to meet the finalists, I’d like to praise them for their learning and in particular Adam for his outstanding achievements in the world of dance.”