“Exemplary” Shane proves up to the challenge with Tata Steel 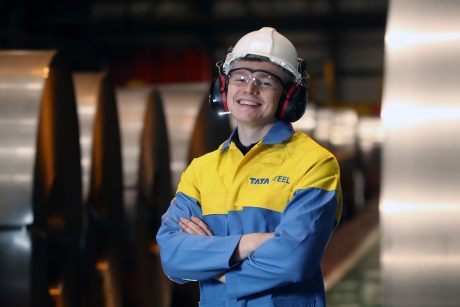 Engineering apprentice Shane Ash is using his training and skills to save his employer, Tata Steel, time and money.

Shane, 26, from Risca, has already identified changes that saved more than £22,000 when managing a major project to manufacture and install a coil transfer car. He regularly works overtime to ensure projects are completed on time.

He is now in the design phase of introducing a drossing robot to improve speed and health and safety on the galvanising line at Llanwern steelworks, after spotting the robot’s potential during a work placement in Holland. When installed, a robotic arm will remove impurities from molten zinc during the galvanising process.

Now Shane has been shortlisted for the Higher Apprentice of the Year Award at the Apprenticeship Awards Cymru, the annual celebration of outstanding achievement in training and apprenticeships.

Other qualifications achieved include a Level 4 Process Evolution in the Steel Industry and IOSH Managing Safely. The degree is through the University of South Wales, where Shane also achieved his HND as part of a Bridgend College Higher Apprenticeship programme, delivered in partnership with Coleg Gwent.

“The personal progress I have made because of my apprenticeship is more than I could have hoped for,” said Shane. “Being so keen about progressing and learning to be the best I can be, I am always striving to challenge myself to gain as much experience as possible.”

Jon Matthews, Tata Steel’s central engineering manager at Llanwern, praised Shane’s “exemplary” attitude. “I cannot speak highly enough about Shane, who will be a key asset in our company’s future growth in talent,” he said.

Minister for the Economy and Transport, Ken Skates, congratulated Shane and all the other shortlisted finalists.