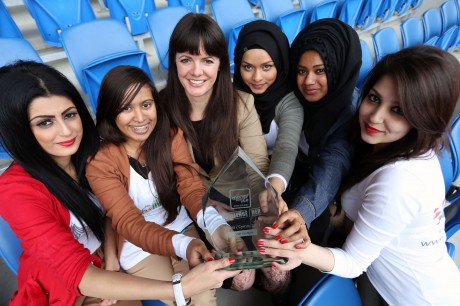 A team of young people from Cardiff is celebrating success today after being crowned winners at the Wales final of Lloyds TSB Money for Life Challenge, a UK-wide competition designed to inspire better money management skills within communities.

The team of learners between the ages of 17 and 19 fought off competition from all over Wales at yesterday’s ceremony in Cardiff with their innovative project to provide kits to help people save money by growing their own fruit, vegetables and herbs.Their project convinced judges of the team’s winning ability to not only improve their own money management skills, but to use these to have a positive impact on their local community.

Grow and Save from ITEC Training Solutions will now progress to the Money for Life Challenge UK Grand Final in Central London on May 23, where they’ll compete against teams from Scotland, Northern Ireland and England to claim the title of overall Money for Life Challenge winners. The team has won £1,000 to donate to a charity of its choice and £50 shopping vouchers for each team member.

Farhin Begum, 19, from Grow and Save, said: “We are just overwhelmed to win the award. It has boosted our confidence even more and we are going to carry on developing the project. We plan to expand it from 20 primary schools and nurseries in Cardiff to hospitals, hostels and homes for the elderly.”

The team’s sponsor, Annabel Fuidge, team mentor from ITEC Training Solutions, said: “I am so proud of the girls. They have really engaged with the project, which they want to continue to develop. We will be there to support them every step of the way.”

Sarah Porretta, Head of the Money for Life Programme at Lloyds Banking Group, said: “We’re delighted to announce Grow and Save as the winners of the Money for Life Challenge Wales final. Our judges were incredibly impressed by the way the team had taken a simple idea and taken it so far into their community. Growing herbs and vegetables in your garden or on your window sill is easy to do and the savings you make will really add up.

“The Money for Life Challenge is now in its second year and it’s inspiring to see so many young people being empowered to learn new ways to manage their money well and support others by passing on these skills. We look forward to welcoming Grow and Save to the Grand Final on May 23 and wish them all the best of luck.”

The winning team at the UK Grand Final on May 23 will win a Lloyds Banking Group mentor, £2,500 for a charity of their choice and £100 of shopping vouchers for each team member. There will also be an overall People’s Prize winner selected by guests at the event.

The other finalists were:

Money for Life Challenge is part of the Money for Life programme, a unique partnership between Lloyds Banking Group and further education sector partners in the four nations of the UK, including ColegauCymru / CollegesWales and the National Training Federation for Wales.

The competition aims to find the most successful and innovative ways to improve the money management skills of learners, their friends, families and communities. Team members are between 16 and 24 years old and in further education, work based learning or adult community learning.