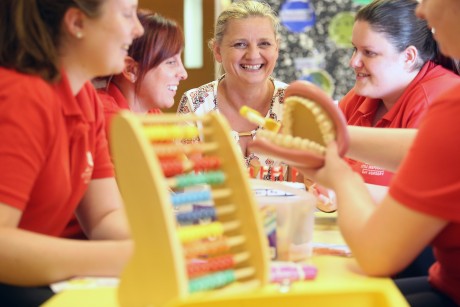 The director of Llantrisant-based nurseries business Little Inspirations Limited will not forget the year 2015 in a hurry.

Having been named VQ (Vocational Qualifications) Employer of the Year and Best Service Business in Rhondda Cynon Taff earlier this year, Jenine Gill’s company is now in contention to win a major award at the Apprenticeship Awards Cymru 2015.

Little Inspirations is one of three finalists shortlisted in the Medium-sized Employer of the Year category at the high profile awards ceremony to be held at the Celtic Manor Resort, Newport on Thursday, October 29.

Little Inspirations, which was established 13 years ago, employs 55 staff in three children’s nurseries in Llantrisant, Rhydyfelin and Barry, with a fourth setting due to open in Barry in September.

Jenine, who is dyslexic and left school with minimum GCSEs, is passionate about vocational learning as a pathway to fulfilling the true potential of her staff to provide the optimum standard of care to children attending the nurseries. Every member of staff has either completed or is engaged in an Apprenticeship.

Little Inspirations is recognised as an Investors in People, a lifelong learning centre and the Llantrisant nursery been identified as sector leading by Estyn.

Mother of two Jenine leads by example. Having completed an Apprenticeship, she has also achieved Institute of Leadership and Management (ILM) levels three and four qualifications and is soon to begin a Higher Apprenticeship.

“In the child care industry reputation and having highly skilled and trained staff are vital to success,” said Jenine. “Quality service is guaranteed at Little Inspirations due to the Apprenticeship programme and our commitment to personal development.”

Deputy Minister for Skills and Technology Julie James congratulated Little Inspirations and the other 36 award finalists. “We have some truly exceptional learners here in Wales and the Apprenticeship Awards Cymru provide a perfect platform for us to celebrate their hard work and achievements,” she said.