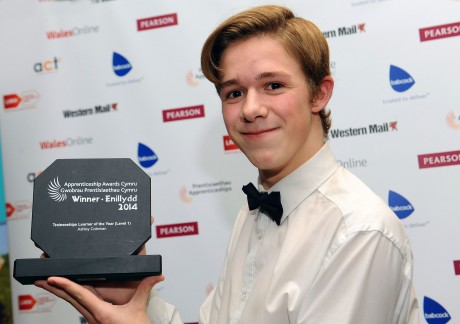 Ashley Coleman with his award.

An inspiring young Cardiff teenager, who has shown remarkable commitment to make life better for himself after a very rocky start, has won a prestigious national award.

Ashley Coleman, 18, collected the Traineeships Learner of the Year Level One award at the high profile Apprenticeship Awards Cymru 2014 ceremony, held at the Celtic Manor Resort, Newport on Friday (October 31).

Organised jointly by the Welsh Government and the National Training Federation for Wales (NTfW), the awards showcase excellence in skills development in Wales by learners, employers and learning providers. Sponsor is Pearson PLC and media partner is Media Wales.

Ashley is delighted that his efforts are paying off and has secured an apprenticeship with commercial law firm Darwin Gray.

He was taken out of primary school and home-schooled, then had to leave home at a young age. With no GCSEs and limited prospects, he was determined to work towards qualifications and worked extremely hard on an engagement programme with ACT Training.

His confidence improved and he secured a placement at Darwin Gray, where he impressed bosses so much they have now offered him an apprenticeship.

“I am absolutely overwhelmed to win this award,” he said. “It was such an honour to be shortlisted for the award and it’s a nice acknowledgement of the journey I have been on. I didn’t think I was going to get very far in life and I had low self-esteem and confidence.

“To be able to be here now holding this award and to have the recognition is astounding.”

He praised ACT Training for helping him to improve his skills and confidence and said: I’m more motivated than ever to achieve a good career.”

Deputy Minister for Skills and Technology, Julie James said: “Vocational training provides learners with the skills, qualifications and experience they need whilst helping our businesses to grow. These awards are a chance for us to recognise the wealth of talent we have in Wales.

“The dedication that Ashley has shown to improve his prospects is really inspirational. His example proves that a traineeship is an excellent route to an apprenticeship. I’m so pleased that he has now been given the opportunity to continue to develop his skills and knowledge.”