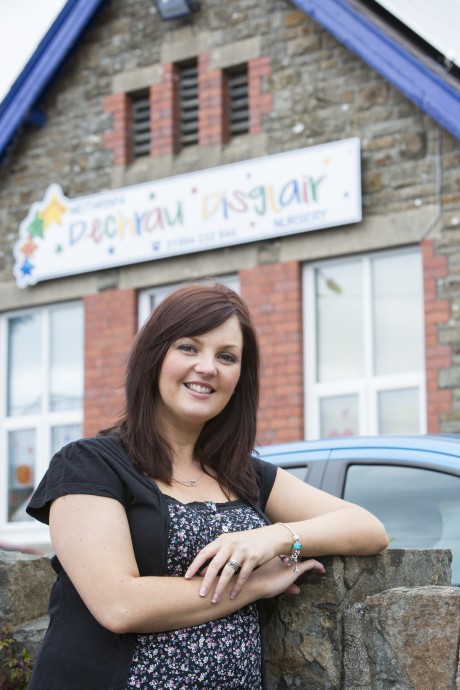 An inspirational woman who left school at the age of 16 to focus on a career in childcare is now running her own bilingual nursery in Carmarthenshire after achieving a series of vocational qualifications.

Emma Thomas, 28, set up ‘Dechrau Disglair’ (Bright Start) in St Clears in 2011 and now employs 24 staff caring for 35 children a day under the age of seven. Her story is one of achievement and progression to realise her dream of running her own childcare business.

Her learning journey has won her a place in the final of this year’s prestigious Vocational Qualification (VQ) Awards in Wales. She is one of six finalists in the running to become VQ Learner of the Year at the showpiece awards ceremony on June 4, VQ Day, at Coleg y Cymoedd, Nantgarw.

VQ Day is a national celebration of people who have achieved success in vocational education in Wales.

Emma began working with children with special needs in a holiday club at the age of 15, followed by a classroom assistant’s post in a primary school, where she achieved a Foundation Apprenticeship in Childcare within a year.

She then became after school club leader and progressed to an Apprenticeship in Childcare, which she completed in 2006 whilst working as a deputy manager in a nursery.

Determined to set up her own nursery, she purchased and renovated an old school building in St Clears, working to a tight schedule. Leading her team by example, Emma has recently completed a Higher Apprenticeship in Childcare Leadership and Development Management and encourages all her staff to develop their skills and achieve vocational qualifications.

“The nursery is a fantastic childcare facility where learning is encouraged and promoted amongst the children and staff,” said Maria Bradbourn, training mentor and Welsh champion at City and County of Swansea Lifelong Learning and Employment Training Service, who nominated Emma for the VQ Award.

Emma said she has always had passion to work with children and wants to be a role model for her team. “To ensure that I provide a very high standard child care environment for families I need to have high quality staff who constantly improve their skills to fulfil their potential,” she added.

The other VQ Learner of the Year finalists are Matthew Edwards, an apprentice butcher with S. A. Vaughan Family Butchers, Penyfford, near Chester who was nominated by Cambrian Training Company, Ashleigh Zeta Jones and chef Rhys Sinfield who were both nominated by Bridgend College, Corey Nixon nominated by Gower College Swansea, Ebbi Ferguson who was nominated by Coleg Sir Gâr, Llanelli.

VQ Day supports the aspiration that vocational qualifications, which are not just for young people, should achieve parity of esteem alongside other educational routes.

Wales’ Deputy Minister for Skills and Technology, Ken Skates, wished the nine finalists success on June 4. “Vocational Qualifications are the gold standard in professional excellence and we must ensure they are recognised alongside academic qualifications for their value to learners and the Welsh economy.

“Wales has a real wealth of talented and committed people who have excelled in their vocational studies and VQ Day is a chance for us to celebrate their achievements. A VQ award is more than just an award; it’s a symbol of dedication towards your chosen profession.”