Using Welsh in the Workplace

Twelve Apprenticeship Ambassadors have been appointed with the aim to inspire other apprentices and prospective apprentices to use their Welsh language skills in the workplace, and to consider completing their apprenticeship either partly or wholly through the medium of Welsh. 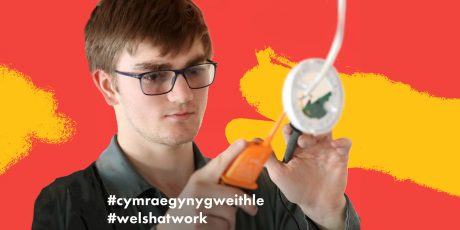 The Ambassadors represent a variety of occupational sectors, including the Welsh Government’s priority sectors for Welsh and bilingual apprenticeships – Health and Social Care, Early Years, Construction and Agriculture.

The Ambassadors attended a virtual training session where they were able to hear from inspirational speakers. Over their time as an ambassador for NTfW and the Coleg Cymraeg Cenedlaethol they will be involved in creating social media posts and sharing their experiences so as to inspire others. They will also write blogs, film vlogs; and contributing to discussions on radio and/or TV.

Many of the Apprenticeship Ambassadors were involved in an Instagram takeover between 25 and 29 October 2021.

Gethin, who is a plumbing apprentice for Aber Heating Engineers Ltd, showed how he uses Welsh on sites with his co-workers. Jack, who works as an apprentice chef at Sage Kitchen at Menai Bridge, shared clips of himself making lamb croquettes and profiteroles from scratch; and Cedron, who is a translation apprentice, introduced the Welsh version of ‘Careersville’ (Tregyrfa) on the HEIW website, which is an interactive ‘town’ where you can find out more about all the different types of careers in the Care Sector, and how you can become qualified in each role.

You can catch up on their stories in the ‘Prentisiaethau’ highlights.