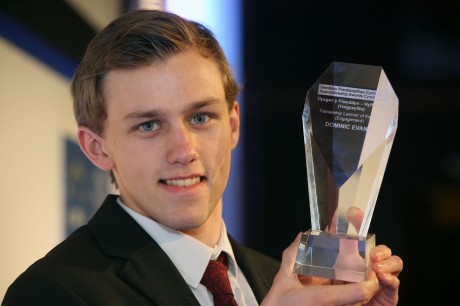 Dominic Evans with his award.

A young chef from Newport who works at the Celtic Manor Resort has won a prestigious national award.

Dominic Evans, 18, was named Traineeship Learner of the Year for Engagement at the Apprenticeship Awards Cymru 2013, organised jointly by the Welsh Government and the National Training Federation for Wales (NTfW). The high profile awards ceremony was held on home territory for Dominic at the Celtic Manor Resort.

His reaction to winning the award: “Brilliant, I just can’t believe it. This award is going to give me a massive confidence boost for the future.”

Dominic excelled in his GCSEs but decided to leave school after a year of sixth form and was offered a Traineeship with ITEC as a stepping-stone to more qualifications and a job.

“I didn’t know what I wanted to do and I was very shy,” he said. “As part of the Traineeship I went on a work placement in the kitchens at the Celtic Manor Resort. I absolutely loved it, worked very hard and I didn’t miss a single day during my six-month placement, which resulted in my being offered an apprenticeship.”

Dominic is now a trainee chef, working with the Olive Tree Restaurant kitchen team, which cooks up to 700 buffet breakfasts every day.

“I have a brilliant job and I’m always learning something new. There is no way I could have done this without going through the Traineeship and I am very grateful,” said Dominic.

“I work hard because I know that this is my big chance and I’m not going to waste it.”

Dominic will soon start his Level 2 in Food Hygiene and is also taking part in the Celtic Manor’s own in-house training programmes.

Joel Williams from ITEC said: “Dominic was a very shy, quiet personality when he joined us but his confidence is going from strength to strength. All who have come into contact with Dominic admire his determination to succeed and speak highly of him.”