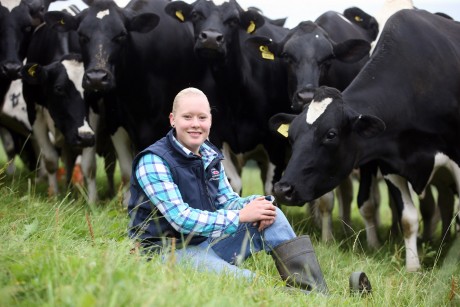 Megan Wilkins described herself as a shy girl before beginning work on Cwmnofydd Farm at Machen near Caerphilly. Now she is in contention to win a major award at the Apprenticeship Awards Cymru 2015.

Megan, 19, who lives in Newport, is one of four finalists shortlisted in the Apprentice of the Year category at the high profile awards ceremony to be held at the Celtic Manor Resort, Newport on Thursday, October 29.

A combination of working with animals and undertaking an Apprenticeship brought Megan out of her shell and she is now developing a career and plans to complete a degree in agriculture.

Megan saw the sector as male dominated and thought she would struggle to get people to take her seriously in the industry. But after searching for a job and convincing the owners of the family farm to take her on, she hasn’t looked back.

Bridgend College has provided Megan and her employer, Owen Tamplin, with ongoing training and advice throughout her Apprenticeship in Agriculture.

“I had to overcome many barriers due to my quiet nature and as a girl entering into typically a man’s role. I have certainly come out of my shell and love caring for the animals on the farm,” said Megan.

“Being able to undertake an Apprenticeship was important for me. It provided an avenue to training and employment that I might not otherwise been able to do through just a course or training in their own right.

“With the ongoing experience of work and being paid for it, together with the training I’m undertaking, I’m learning so much hands on. It’s brought me out of my shell even more and I’m now very confident in working on and running aspects of a farm.”

“I am now coming to the end of my first year on HND and after this I want to complete my full degree in agriculture at Harper Adams University,” she added.

Farm owner and employer, Mr Tamplin, said: “Megan is becoming an experienced herdswoman and often has the responsibility of feeding, milking, cleaning and bedding an 80 strong dairy herd.”

Deputy Minister for Skills and Technology Julie James congratulated Megan and the other 36 award finalists. “We have some truly exceptional apprentices here in Wales and the Apprenticeship Awards Cymru provide a perfect platform for us to celebrate their hard work and achievements,” she said.