Apprenticeship awards at the double for “inspirational” recycling company 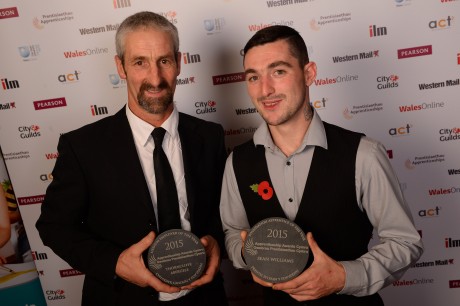 A unique approach to employment and training by a North Wales waste and recycling company was recognised with double success at the Apprenticeship Awards Cymru 2015.

Thorncliffe Abergele, a family owned company established in Abergele 1987 which has been described by a training provider as “inspirational”, was named Medium-sized Employer of the Year while superviser Sean Williams collected the Foundation Apprentice of the Year award.

Site manager Stephen Harper said it was a “massive” award to win. “It means a lot to me because we have taken on and given a second chance to ex-offenders,” he added. “Thorncliffe is an expanding company and we need skilled people.”

Ex-offender Sean, 27, from St Asaph, has grabbed his second chance to turn his life around and set the foundations for a career to support his family. “I was in prison a lot as a kid for fighting but my job and my two-year-old daughter, Maizie Jaye, have changed my life. Everything I do is for her.

“I thought I would always be in and out of the jail system, but it just shows that if you are willing to learn and change your life, anyone can do it.

“This award is recognition that I have tried to pay back society for what I did as a kid. I couldn’t ask for a better boss than Steve Harper who has given me so much responsibility at work.”

The high profile awards ceremony, attended by 450 guests, was held at the Celtic Manor Resort, Newport on Thursday. The coveted awards celebrate the outstanding achievements of those who have exceeded expectations, shown a dynamic approach to training and demonstrated initiative, enterprise, innovation, creativity and commitment to the improvement of skills development for the Welsh economy.

Jointly organised by the Welsh Government and the National Training Federation for Wales (NTfW), the awards are sponsored by Pearson PLC and media partner is Media Wales. The Apprenticeship Programme, led by the Welsh Government, is supported by the European Social Fund.
Thorncliffe Abergele has reduced the amount of waste going to landfill from 8,384 tonnes in 2013 to 887 tonnes last year and is aiming for zero waste. The company, which has a workforce of 52, has invested in cutting edge equipment, including a new refuse derived fuel processing plant, which bales waste.

To achieve its goals, the company launched an Apprenticeship programme, working closely with learning provider Cambrian Training Company, three years ago. The company has recruited 28 apprentices since the programme began and currently has seven working towards a Foundation Apprenticeship and Apprenticeship in Sustainable Resource Management.

Working with the Probation Service, Thorncliffe Abergele provides employment and training opportunities to ex-offenders, a programme that won an Inspire! Award for best project for its positive impact in the local community.

Site manager Mr Harper has also been nominated for a Police Crime Commissioner award for his work with ex-offenders. “The project is giving employment opportunities that are enabling people to turn their lives around, gain training and new skills and provide a sustainable future for them and their families.

“Heather Martin from Cambrian Training Company has put a lot of time and effort into training people to the required standard.”

Heather described Thorncliffe Abergele’s commitment to giving offenders a second chance as “a truly inspirational approach to employment and training.”

Having achieved a Foundation Apprenticeship in Sustainable Resource Management, Sean is now working towards an Apprenticeship and hopes to progress to a Higher Apprenticeship so that he can run the site one day. He has learned how to run and maintain new machinery to bale waste to be used as refuse derived fuel.

He was taken on after being introduced to the company by a Probation Service programme, “8 ways to change your life” and offered work experience. Following his release from prison, he had been unemployed for six months and feared he had little prospect of work due to his criminal record.

“I have challenged myself to change my whole life to one that focuses on my family and providing for them rather than a life of crime,” said Sean. “
“Since starting a Foundation Apprenticeship I have taken every opportunity given to me to progress and create a career for myself and I have recognised that education and training plays a huge part in this.”

Mr Harper said: “Sean is a very hard working, determined individual who sets a great example to others who have made some wrong choices, showing them that it is possible to successfully turn their lives around.”