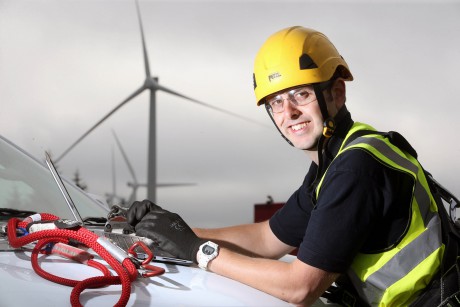 Michael Leach is one of the first people to complete the Level 3 Apprenticeship in Wind Turbine Operations and Maintenance in Wales.

Michael Leach from Pontypridd has benefited from a life-changing career opportunity in an industry he truly believes in, thanks to the Welsh Government’s apprenticeship programme.

Michael, 31, is one of the first people to complete the new Level 3 Apprenticeship in Wind Turbine Operations and Maintenance in Wales. This has meant overcoming significant challenges including returning to the classroom after many years and travelling long distances from home.

As a reward for his dedication, he has been shortlisted for the Apprentice of the Year award at this year’s Apprenticeship Awards Cymru, which take place at Venue Cymru, Llandudno on October 20.

After a year learning basic engineering skills at a local college, Michael spent the second year of his course at Grwp Llandrillo Menai, Rhos-on-Sea, studying wind turbine technology. The final year was on-site training at an offshore windfarm near Thanet in Kent with Isofab. Gaining all possible distinctions and helping others on his course, Michael impressed his managers so much that they nominated him for Renewables UK Apprentice of the Year 2015, which he won.

During his apprenticeship, Michael spoke about his experiences at the Renewables Conference in Cardiff’s City Hall and to MPs at a Wind Awareness event in Parliament.

Now a Wind Turbine Technician for Vattenfall, working at Pen-y-Cymoedd, the largest onshore wind farm in England and Wales, Michael said: “I wasn’t the stereotype apprentice; I hadn’t just left school and because of this I always felt I had something to prove, if only to myself. I am humbled by the recognition from college assessors and colleagues.”

Contracts Manager at Isofab, Richard Morris, said: “Michael has demonstrated to us that he has the attitude, self-determination and drive to succeed in this challenging industry.”

Wales’ Minister for Skills and Science Julie James congratulated Michael and the other 32 shortlisted award finalists. “We are proud to be delivering one of the most successful apprenticeship programmes in Europe with success rates in Wales remaining well above 80 per cent,” she said.