Aron and his employer reap the rewards of his career dedication

Apprentice Aron Jones, who has achieved his dream of becoming an electrical engineer through dedication and hard work, has been shortlisted for a prestigious Apprentice of the Year award in Wales.

Aron, 20, from Blaenau Ffestiniog, is one of 36 finalists in 13 categories of the Apprenticeship Awards Cymru 2013, organised jointly by the Welsh Government and the National Training Federation for Wales (NTfW). 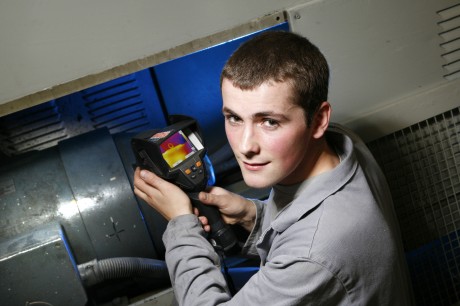 Aron is now rewarding his bosses by helping them to save money by improving the maintenance and efficiency monitoring of electrical equipment and appliances in the plant.

Following a work experience placement at Rehau Ltd at Tanygrisiau in 2008, Aron set his heart on working for the global polymer processing company.

He spent every school and college holiday at the company, gaining hands-on experience in the electrical department and was rewarded in 2010 with a three-year apprenticeship, which he completed this year.

He now hopes to progress to an incorporated engineer and become a STEM (Science, Technology, Engineering and Maths) apprentice ambassador.

At his suggestion, the company invested in a thermal image camera to identify and predict faults in electrical panels and motors before they happen, thereby eliminating costly production problems. Other ideas have reduced energy costs and extended the life of machines.

“I enjoy what I do as a trade and wouldn’t change it for any other job,” he said. “During my apprenticeship I’ve worked hard and shown a dynamic approach to training and demonstrated initiative, enterprise, innovation and creativity.”

The other Apprentice of the Year finalists are April Davies from Dolfor, Newtown, who works for a farm and ice cream business and Emma Brooks, a children’s nursery worker from Llandrindod Wells.