Two Bridgend College students will represent Wales at next month’s Grand Final of the Lloyds Banking Group’s Money for Life Challenge, which aims to inspire better money management skills in local communities across the UK.

The Broke but Beautiful team – Bethany Browning and Mary Thomas – won the People’s Prize at the challenge’s Wales final held at The Royal College of Music and Drama, Cardiff yesterday. 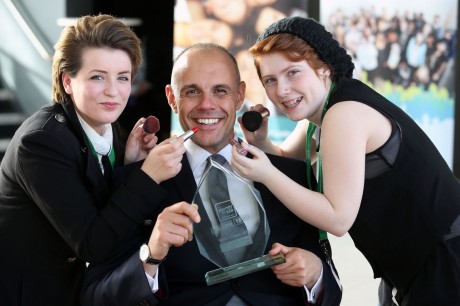 Compere Jason Mohammad has a make-up session with Bethany Browning (right) and Mary Thomas, from the People’s Prize winning Broke by Beautiful team from Bridgend College, at the Money for Life Challenge Wales Final.

People attending the final were asked to vote for their favourite from the 11 teams in the final. The Bridgend College students formed their project to show people receiving benefits how to save money on fashion and beauty.

Recognising the importance of looking presentable when attending job interviews, the project aimed to boost the self-esteem of unemployed people. Facebook, Twitter and YouTube were used to promote the project on social media and a stand was held outside the local Job Centre to share tips with job seekers.

Two other teams from Bridgend College – Byte Back on a Budget and The £ Factor – were also in the running for the prize.

“It’s so amazing to win the People’s Prize because we were not expecting it,” said Bethany. “It’s nice to be rewarded for all the effort we’ve put in to the project.”

The overall Wales champions were Fashion on a Budget, a team of 17 to 19 year olds from East Cardiff, Llanedeyrn and Pentwyn (ECLP) Communities anti-poverty programme. They collected £1,000 to donate to a charity of their choice and each team member received £50 shopping vouchers.

Both Fashion on a Budget and Broke but Beautiful will now represent Wales at the Money for Life Challenge Grand Final at the 02 Venue in London on May 15, where they’ll compete against champions from England, Northern Ireland and Scotland.

The 11 teams that competed in the Wales final set up their projects in January, when they were awarded a £500 grant from Money for Life to put their ideas into action. They reached final after demonstrating to the Money for Life Challenge judges that they had what it takes to improve not just their own money management skills, but those of their friends, families and even their local communities.