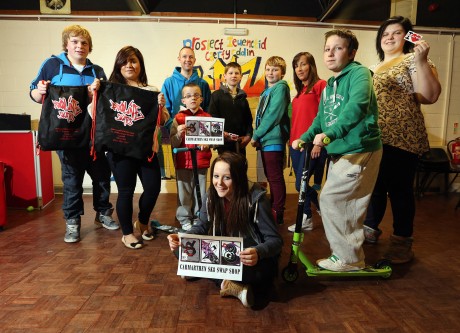 A team of 16 to 23 year olds from Carmarthen is in the running for a prestigious national award after impressing judges in the first round of the Lloyds TSB Money for Life Challenge, a competition designed to inspire better money management skills.

The team of young people from Carmarthen Youth Project is now gearing up to go to the Welsh final at Cardiff City Stadium on 23 April where they will showcase their Money for Life Challenge project called Sk8 Swap Shop. Since becoming one of 250 projects in the UK to receive a £500 grant in December, the team has put their project into action as money saving experts by promoting money management through a swap shop, inviting members of the community to their event to swap their stuff.

Martin Mansfield, aged 23, from Sk8 Swap Shop says: “It was a good day and we made the boys share the poster on Facebook to make sure everyone knew! We even went down to the skate park on the day to grab as many people as we could to bring back. Fair play, everyone really pulled together and loads of people turned up!”

Sk8 Swap Shop will be joining a shortlist of five Welsh teams whose inspiring money management projects are having a positive impact on their local communities, families and friends.

The team’s sponsor, Emma Pitt, a youth worker at Carmarthen Youth Project says: “It was refreshing to see how the older boys took lead on the day and really looked out for the younger ones. Whether they realise it or not, they are role models to the younger ones and to see them realise this role was awesome! It also allowed them to put aside their differences – whether scooter rider or skater, on 4 March 2013 it didn’t matter and saving money presided!”

On the day of the Welsh final of the Money for Life Challenge, the lucky teams will present their projects to a panel of judges and the winning team will then go on to the UK Grand Final in London on 23 May. If Sk8 Swap Shop is crowned national winner they will also receive £1,000 to donate to a charity of their choice and £50 shopping vouchers for each team member.

Sarah Porretta, Head of the Money for Life Programme at Lloyds Banking Group, said: “The Money for Life Challenge is a great way of empowering young people to manage their money well through supporting others with the exact same skills. Now in its second year, the calibre of the projects never ceases to impress and what’s most striking is the creativity and passion shown by the young people in bringing their original idea to life to make a real difference in their communities.

“We look forward to hearing all about Sk8 Swap Shop project at the Wales final and wish them all the best of luck.”

The winning team at the Grand Final on 23 May will win £2,500 for a charity of their choice, £100 of shopping vouchers for each member and a Lloyds Banking Group mentor. There will also be an overall People’s Prize winner selected by guests at the event.

Money for Life Challenge is part of the Money for Life programme, a unique partnership between Lloyds Banking Group and further education sector partners in the four nations of the UK, including Colleges Wales and the National Training Federation for Wales. The competition aims to find the most successful and innovative ways to improve the money management skills of learners, their friends, families and communities. Team members are between 16 and 24 years old and in further education, work based learning or adult community learning.

The additional Welsh finalists are: Grow and Save from ITEC Training Solutions, a community based project that aims to encourage people to grow their own fruit, vegetables and herbs to help them save money; Rampart Rebels from Employment Training Centre in Swansea, a project that aims to inform the public about loan sharks in Swansea; and Swimming with the Sharks from Neath Port Talbot College, raising awareness of the dangers of lending money from loan sharks and providing information on alternative ways to borrow money and Quit and Sav£ from Caerphilly, raising awareness on the financial benefits of giving up smoking.