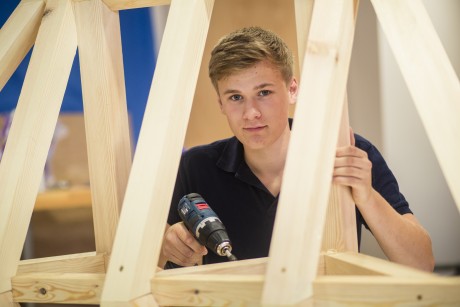 Simon McCall seeking a place in the UK team for WorldSkills in Brazil.

Young West Wales carpenter Simon McCall’s dedication and commitment to achieving perfection have won him an international medal and a place in the WorldSkills Squad UK.

Simon, 21, who lives in Capel Dewi near Carmarthen, won his place in Squad UK having come through a number of regional and national competitions, the initial entry having been whittled down from 700.

He was nominated for the award by Paul Evans, co-ordinator of the Inspiring Skills Excellence in Wales Project based at Coleg Sir Gâr, Llanelli. He describes Simon as a “totally dedicated young man” whose work ethic has impressed tutors and who is now sharing his skills and experience with learners at the college.

He was encouraged to further hone his skills by competing in regional, national and international competitions. In 2013, he won silver medals at both Skills Competition Wales and the WorldSkills UK regional heat and a medallion of excellence at the final held at the Skills Show.

Last year, he won a gold medal at the WorldSkills UK regional heat/ Welsh National Final, was invited to join the UK squad for WorldSkills in Sao Paulo 2015 and was a silver medallist at Euroskills in Lille, France, missing a gold medal by one per cent.

Last year, he won a gold medal at the WorldSkills UK regional heat/ Welsh National Final, and was invited to join the UK squad for WorldSkills in Sao Paulo 2015. He also won a silver medal at Euroskills in Lille, France, missing a gold medal by one per cent.

He became self-employed last October to dedicate more time to training. “It does take a lot of commitment but not many people can say they made it to Squad UK and hold a European medal,” he said.