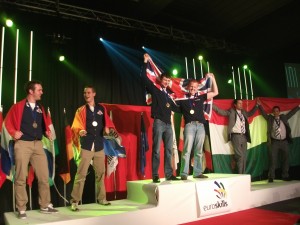 Coleg Sir Gâr student and Paul Taylor Building Services apprentice Gareth Jones, 19, from Ammanford, wins gold for the UK at the EuroSkills 2012 competition in Belgium in the carpentry category. He is pictured with team member Philip Glasgow from Northern Ireland.

The Deputy Minister for Skills, Jeff Cuthbert, has congratulated an Ammanford apprentice for striking gold at this year’s EuroSkills competition in Belgium.

19 year-old Gareth Jones, from Garnant in Ammanford, won the gold medal for the UK in the carpentry category at EuroSkills, which is a member of WorldSkills International – the largest global skills competition.

He competed as part of his selection for Squad UK, which is made up of the UK’s most talented apprentices, learners and employees training to secure a place in the team which will represent the UK at WorldSkills 2013, in Leipzig, Germany.

“The whole experience was fantastic,” said former Amman Valley Comprehensive pupil, Gareth.
“The opening ceremony was pretty amazing and echoed the recent Olympic Games with a parade of nations in a very glitzy affair.”

Deputy Minister for Skills, Jeff Cuthbert, who attend the event last weekend, said: “I would like to congratulate Gareth for his excellent performance in picking up the gold medal at EuroSkills. It is testament to his hard work and ability as I saw for myself the very high standard of competitors at the event from all over Europe.

It’s important that trainees and apprentices from Wales take part in these competitions to pit their skills against international competition and demonstrate the talent, skills and high quality training facilities that we have here.

Gareth is currently honing his skills at Coleg Sir Gâr, who have an excellent track record for supporting these skills competitions and providing members of the UK team.”

Over 400 competitors took part from all over Europe in over 40 different competition categories. Paul Evans, Coleg Sir Gâr coaching mentor said: “Competing at EuroSkills means that competitors can benchmark their skills against the best from all over Europe and it’s a good experience of what the international stage of the competition will be like.”

The competition took place at the famous Spa-Francorchamps Racetrack and attracted around 40,000 visitors to the event. Gareth represented the UK in his category as part of a team, competing with Philip Glasgow, 21, from Northern Ireland.

Paul Evans added: “It’s particularly moving for us to see Gareth accomplish this fantastic achievement as he started with the college at a very young age as part of a school links programme and then progressed to a Pathways to Apprenticeships programme where his skills and talent were becoming evident when he started taking part in competitions at Skills Competition Wales in 2010.

“We must acknowledge Gareth’s employer, Paul Taylor Building Services in Gareth’s achievement, for providing him with industry training and time to compete at the many competitions he’s won over the last two years.”