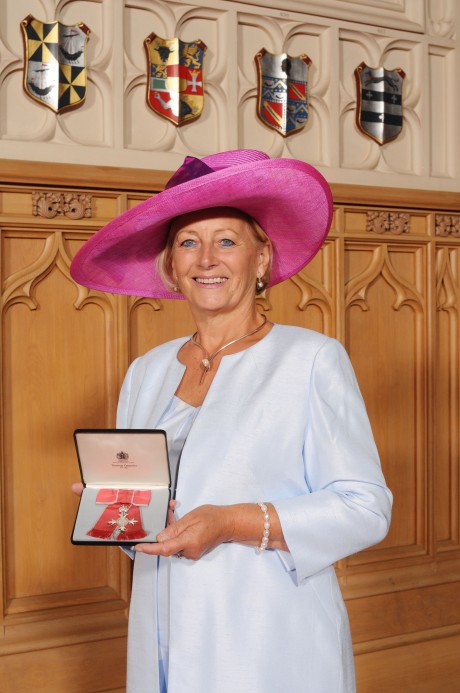 Shirley Davis-Fox with the MBE at Windsor Castle.

The dynamic chair of the largest independent hair and beauty training provider in Wales has spoken of the “fabulous day that I didn’t want to end” after receiving an MBE from the Princess Royal at Windsor Castle.

Shirley Davis-Fox, co-founded Bridgend-based ISA Training, said everything was perfect, as her husband, Gren, son Marc, who flew in from his home in France and step son Richard were there to witness the ceremony and share the moment with her.

“I was so proud to be representing all my colleagues at ISA Training and in the hair industry because without them I would not have received the MBE,” she said. “Every step I took, I took for them as well as me.

“The Princess Royal was genuinely interested in what I had to say about the hair industry. It was an absolutely fabulous day and fascinating to meet all the other recipients from all walks of life. I didn’t want the day to end.”

Shirley was awarded the MBE in the New Year’s Honours List for her services to the hairdressing industry. Having co-founded ISA Training in 1998, she now heads a successful company with more than 60 staff, who deliver training to around 800 apprentices in 500 businesses across Wales and the borders.

The MBE recognises her tireless campaigning to promote the professionalism of the hairdressing industry, driving up standards, offering outstanding opportunities to ISA Training’s apprentices and gathering respect and recognition for the vibrant hair sector and all who are qualified and practice within it.

“I feel so honoured to have received this recognition,” she said. “I passionately believe in the hair sector and the professionalism of hairdressing.”

Shirley has been a member of the Hair Council since 2011, was appointed vice chair in May and is also the organisation’s political lobbyist following her successful campaigning work in Wales for the state registration of all qualified hairdressers and barbers.

In 2013, ISA Training was named Training Provider of the Year in the Apprenticeship Awards Cymru and also won the Bridgend Business Service of the Year award.