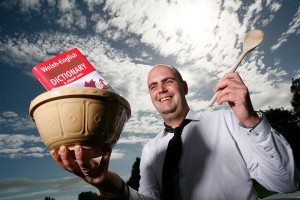 A former chef who has bounced back from redundancy to run his own business delivering courses in Welsh and cookery, has been shortlisted for a prestigious national award.

Robert Owen Jones, 28, from Wrexham is one of 28 finalists in nine categories of the Apprenticeship Awards Cymru, organised by the Welsh Government in partnership with the National Training Federation for Wales (NTfW).

The Apprenticeship Awards Cymru recognise the outstanding achievements of learners, employers and providers involved in the delivery of quality Apprenticeships, Traineeships and other programmes across Wales. Apprenticeship and Traineeship programmes in Wales are part funded by the European Social Fund through the Welsh Government.

When Robert was made redundant, after working as a chef for 10 years, he was devastated. “I’d never been out of work before so it really knocked my confidence,” he explained. “Luckily the job centre referred me to Wrexham ITEC who encouraged me on to the Steps to Employment programme.”

He started the programme in October 2011 and used it to improve his qualifications, particularly in IT, and brush up on his skills. Now he’s a finalist of the Steps to Employment Learner of the Year category.

“The course has really helped me,” he said. “Things like doing a new CV properly and also developing my interview techniques have been really important. I hadn’t updated my CV nor had a formal interview for years.”

Since completing the programme in February, Robert has started his own business delivering courses in Welsh and cookery to local businesses and individuals. He is also about to start a part-time PGCE which will qualify him to teach adults.

“My pride took a massive hit when I was made redundant. Since doing this course I’ve become so much more confident in my own abilities and am proud to be running my own business,” he said.

His tutor at ITEC, Hayley Ann Hand, said: “Robert put in every effort to change his circumstances, to succeed and to keep a positive attitude, which undoubtedly rubbed off on other learners. He’s an inspiration to me and the other learners on the programme, demonstrating that anything is possible with the right attitude and a bit of guidance.”