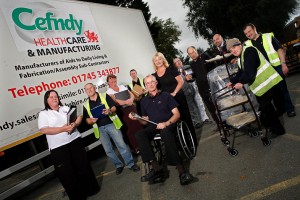 A North Wales business, which provides meaningful training and employment to disabled and socially disadvantaged people, has been shortlisted for a prestigious national award.

Cefndy Healthcare, a business of Denbighshire County Council’s Social Services Department , is one of 28 finalists in nine categories of the Apprenticeship Awards Cymru, organised by the Welsh Government in partnership with the National Training Federation for Wales (NTfW).

A culture of learning and development is very evident at Cefndy Healthcare, a finalist in the Medium Employer of the Year category. As new General Manager in 2008, Deborah Holmes-Langstone realised that some staff had been promoted but had not been given relevant accredited training to support their responsibilities. Others were unlikely to gain promotion as they didn’t have the necessary qualifications behind them.

The organisation needed to develop for the future and become a more robust, qualified and “fit for purpose” workforce. Working with North Wales Training, Apprenticeships were introduced, with staff undertaking National Vocational Qualifications across all departments in the workplace.

“The feedback from the team has been unanimous about what they have gained from the Apprenticeship programme,” said Ms Holmes-Langstone. “This has had equally positive impact on the organisation itself.

“Staff improved their personal performance and so motivation grew as personal development and promotion opportunities increased. The result has been business growth and a significant improvement in the bottom line”.

More than 20 per cent of Cefndy’s staff have engaged in Apprenticeships, leading to three promotions and six people continuing to the next level of their particular programmes.

Since 2008, the organisation’s fortunes have been turned around and, whilst many factors have contributed to this position, the renewed focus on training and the apprentices have played a significant part.

“In 2012, Cefndy’s prospects are extremely positive and this is thanks to Cefndy being one workforce with one shared goal – success for all,” added Ms Holmes-Langstone.