The Apprenticeship Awards Cymru brought together the cream of learners, employers and training providers, who have shown total dedication and commitment to skills development.

Showcasing excellence in skills development in Wales, the awards were organised by the Welsh Government in partnership with the National Training Federation for Wales (NTfW). The main awards sponsor was Pearson and the media partner was Media Wales. 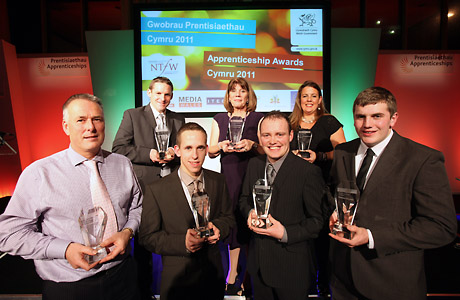 The awards ceremony was held at the Mercure Holland House Hotel, Cardiff where Deputy Minister for Skills Jeff Cuthbert paid tribute to the inspirational stories of achievements by learners, employers and providers involved in apprenticeships across Wales.

“Irrespective of whether or not they collected an award, the 19 finalists are all winners,” he said. “Each has an inspiring story to tell, making them true ambassadors for the Welsh Government’s apprenticeship programmes, which are part-financed by the European Social Fund.

NTfW Chairman, Arwyn Watkins said: “The award finalists are excellent examples of a partnership approach to skills development in Wales by employers, apprentices and providers working together to deliver a high quality, high performing workforce. They are ambassadors who, I am sure, will champion apprenticeships as one of the solutions for economic recovery.”

During his Higher Aeronautical Engineering (Supply Chain Logistics) Apprenticeship, Richard identified savings of over £170,000 within the company through improving the way stock is managed.

He was joined in the list of finalists by fellow Airbus apprentice Beth Pickering, 21, from Mold.

Having completed a Foundation Apprenticeship with Cambrian Training Company, he demonstrated his skills in an international butchery showcase at the WorldSkills event in London last month and has launched his own business, Gwyrhyd Mountain Meat, making door to door sales of quality meat from the family farm.

“I would definitely recommend an apprenticeship because you earn while you learn and you end up with a trade,” he said. “Winning the Young Apprentice of the Year award was a big shock because I didn’t think I stood much of a chance.”

Foundation Apprentice of the Year is Stephen Roberts, of Neatcrown Corwen Ltd, Corwen, who is so highly regarded by his employer that he is often tasked with troubleshooting problems and has developed a test to check the security of seals on bottles

Stephen, who is dyslexic, has completed a Foundation Apprenticeship in Engineering, combining work with training at Yale College in Wrexham and is now progressing to a level 3 Apprenticeship.

“I want to show people that you don’t have to be brilliant at school to be able to achieve things,” he said. “I will run my own business one day and will make sure that I give other people a chance to make things happen and take charge of their own futures.”

A special award for Outstanding Apprentice of the Year went to motor vehicle technician Benjamin Morgan. He completed his Foundation Apprenticeship and Apprenticeship whilst working at Humphreys Garage in Bagillt, Flintshire with training at Deeside College.

Benjamin – who is newly-married – now works full-time at the garage but, due to his reputation as an excellent vehicle technician, is often approached by other garages to deal with complex engine diagnostic problems.

“I realised the importance of getting qualifications if I want to progress within the motor industry,” said Benjamin.

“My spare time and money goes into buying all the latest automotive diagnostic electronic testing equipment. My aim is to set up my own business.”

His tutor at Deeside College, Marshall Clayton, was delighted that Benjamin had won the award: “I have never experienced a learner who has such a desire to excel. He has had distinctions in every one of his exams.”

The Large Employer of the Year Award went to Kronospan of Chirk, the world’s largest manufacturer of wood panel products and laminate flooring. HR manager Ben Hipkiss describes work-based learning was the future of engineering training in the UK.

The introduction of a dedicated apprenticeship programme at Kronospan eight years ago has resulted in apprentice recruitment being embedded into the core of the company’s business plan. The company has recruited 40 apprentices, of which many are being developed to become engineers, team leaders and mentors of the future.

Another award headed for Swansea as the Mercure Swansea Hotel was named Medium Employer of the Year. The hotel established its apprenticeship scheme to enhance opportunities and demonstrate commitment to existing and new staff, but has found it also benefits from increased interest from potential employees.

The hotel currently has 10 apprentices and has recruited and trained 26 over the past five years. They work and train in areas such as customer service, professional cookery, hospitality supervision and leadership, business administration and kitchen services.

“All of the staff who have completed their qualifications have increased their career opportunities and many who have done so have been promoted,” said Lynne Huxtable, HR manager.

The final award for the Apprenticeship Provider of the Year went to Newport-based Acorn Learning Solutions. The company impressed the judges with its record for innovation and delivering learning and development solutions that add real value to apprentices and employers.

The company has trained 4,386 apprentices over the past five years and currently has 1,214 on a programme. Bespoke and customised apprenticeships are delivered to a wide range of employers, including Little Inspirations, Cassidian, Leading Edge Group, Vale of Glamorgan Council, Peacocks, DAS and Zurich.