Members of a Youth Forum supported by Monmouthshire County Council competed in the Wales final of the Lloyds Banking Group’s Money for Life Challenge, which aims to inspire better money management skills in local communities across the UK.

The Engage to Change team was a runner up for the People’s Prize voted for by people attending the final held at The Royal College of Music and Drama, Cardiff yesterday. 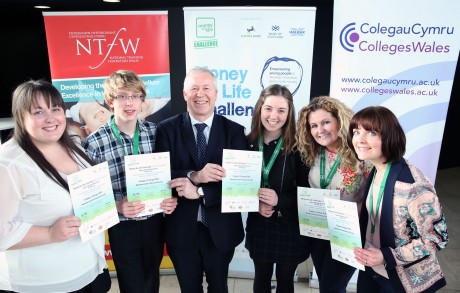 David Rowsell, head of the Money for Life Programme at Lloyds Banking Group, presents certificates to members of the Engage 2 Change team.

The team organised an event to bring together young people from across Monmouthshire to have their say on budget cuts faced by the local authority.

The event took place at Shire Hall, Monmouth where young people were informed and engaged about the budget cuts. Lots of methods were used including graffiti walls to enable young people to have their say. The team learnt budgeting and teamwork skills.

Overall Welsh champions were Fashion on a Budget, a team of 17 to 19 year olds from an anti-poverty programme in Cardiff. The People’s Prize winners were Broke but Beautiful from Bridgend College.

The 11 teams that competed in the Wales final set up their projects in January, when they were awarded a £500 grant from Money for Life to put their ideas into action. They reached final after demonstrating to the Money for Life Challenge judges that they had what it takes to improve not just their own money management skills, but those of their friends, families and even their local communities.