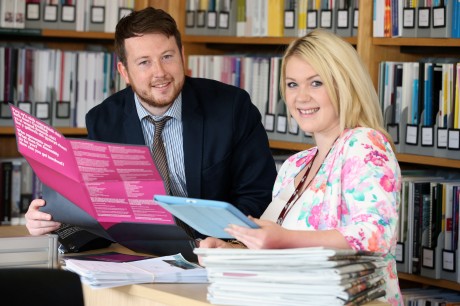 The National Assembly for Wales has been shortlisted as a finalist in this year’s prestigious Apprenticeship Awards Cymru.

The awards recognise employers who commit to developing their workforce through apprenticeships and other work-based learning programmes.

The Assembly has been shortlisted in the Large Employer of the Year category for organsiations which employ between 250 and 4,999 staff.

The Apprenticeship Awards Cymru are organised jointly by the Welsh Government and the National Training Federation of Wales and the winners will be announced at a ceremony at the Celtic Manor Resort, Newport, on 31 October.

“This is a fantastic validation of the National Assembly’s decision to launch an apprenticeship programme two years ago,” said Presiding Officer, Dame Rosemary Butler AM.

“With youth unemployment running at such a high level in the current economic climate, we should all do everything we can to try to offer some young people, from a diverse range of backgrounds, the opportunity to develop their skills through work opportunities.

“All four apprentices from the first cohort have obtained full time posts within the Assembly since completing their apprenticeships and are considered valued members of the workforce.

“We are now building on that success and this year we have taken on six new apprentices.”

The Apprenticeship Programme is funded by the Welsh Government with the support of the European Social Fund.

The apprentices from the first cohort are:

Zoe Kelland, 20, of Rhoose, who worked in the Translation and Front of House teams, added: “One of the best things I have gained is a possible job opportunity. I have also gained an NVQ in Business and Administration.

“I have learnt so much being an Apprentice. I have developed my IT skills and my communication skills, I have represented the Assembly at London’s British Irish Parliamentary Reporting Association event and at the Eisteddfod. I have met so many people and thoroughly enjoyed my time at the Assembly.”

Melissa Nichols, 24, of Cyncoed, Cardiff, works in the Commission & Member Support Team, said: “Starting as an apprentice at the National Assembly for Wales was the best career decision I have ever made.

“I have not only achieved an NVQ in Business Administration but also gained invaluable on the job experience. I see my colleagues as real role models for my development and I continue to learn from them.

“I am delighted to say I am now a permanent member of staff within the Commission and Member Support Service and I look forward to a rewarding career with the Assembly.”

Morgan Reeves, 20, of Maesteg, who spent his apprenticeship in Facilities Management, said: “The Apprenticeship Scheme has provided me with an invaluable opportunity to understand the operation of the Assembly and gain skills in a key public sector organisation.

“Throughout the duration of the scheme, I have matured and gained belief in myself and my work.

“I have developed excellent working relationships together with administration and facilities based skills. The National Assembly is a great place to work and offers many possible career paths.”

Emily Morgan, 23, of Barry, who works in Human Resources, added: “This Apprenticeship has been an invaluable experience which has given me the skills, qualifications, knowledge and work experience needed to obtain a permanent job role in the Assembly.

“I have gained a nationally recognised qualification and I have enjoyed working with different people, facing new challenges, learning new skills and being a part of Assembly life.”

The National Assembly’s Apprenticeship Scheme offers a work-based learning programme over a fixed term (15months) which involves candidates gaining an NQF qualification, provided by Cardiff and Vale College; specific work based competencies and general administrative skills. Coaching and mentoring will also be provided to help initiate candidates into a working environment and help prepare applicants for life in a working office. http://youtu.be/o8ZWHWw5a9I