Oliver excels at his job after overcoming personal challenges 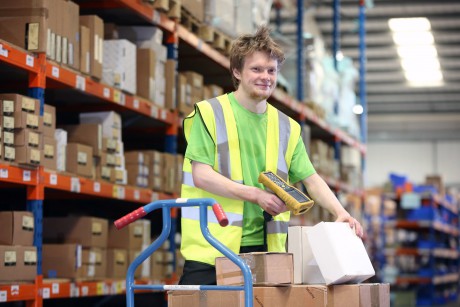 Oliver Chatfield diligently at work in the Faucets warehouse.

Oliver Chatfield has overcome chronic shyness and social interaction difficulties caused by Asperger’s Syndrome to find a job he excels at, thanks to the Welsh Government’s Jobs Growth Wales programme.

Oliver, 23, from Varteg, Pontypool secured a placement as a general warehouse operative with bathroom supplies company Faucets in Pontypool, through learning provider Itec Skills and Employment.

He had previously struggled with job interviews, but the Jobs Growth Wales opportunity proved the turning point. Following one-to-one mentoring and training, Oliver is now so proficient at his job that Faucets has retained him, and he has progressed to a Foundation Apprenticeship in Warehousing.

Due to his diligence and accuracy, he has helped Faucets to improve its order completion rate to 99.5 per cent during a period of increasing turnover. His attendance and time keeping are exemplary.

Now he has been shortlisted for the Jobs Growth Wales Outstanding Achiever Award at this year’s Apprenticeship Awards Cymru, which take place at Venue Cymru, Llandudno on October 20.

Jointly organised by the Welsh Government and the National Training Federation for Wales (NTfW), the prestigious awards celebrate the outstanding achievements of individuals, employers and learning providers who have excelled in contributing to the development of the Welsh Government’s Traineeships, Jobs Growth Wales and Apprenticeship programmes. The awards are sponsored by Pearson PLC and supported by media partner, Media Wales.

Oliver said he feared he may not have found work without the Jobs Growth Wales programme. “I love my role at Faucets and I’ve achieved things that I thought I would never be able to do,” he added. “I can’t thank my employer enough for all the support they’ve given me.”

Rhys Smith, Faucets’ warehouse manager, said Oliver had overcome massive personal challenges and was now a completely different person to the one he had first met.

“Mispicked or misdirected orders have decreased since he has taken an active role in the warehouse and the workload and output of the department have increased rapidly which wouldn’t have been achieved without Oliver,” he added.

Wales’ Minister for Skills and Science Julie James congratulated Oliver and the other 32 shortlisted award finalists. “We are proud to be delivering a number of successful vocational training programmes with success rates for apprenticeships in Wales remaining well above 80 per cent,” she said.