Talented butchers across the UK are to be given a chance to showcase their skills in the Butchery WorldSkills UK National Competition for the first time this year. 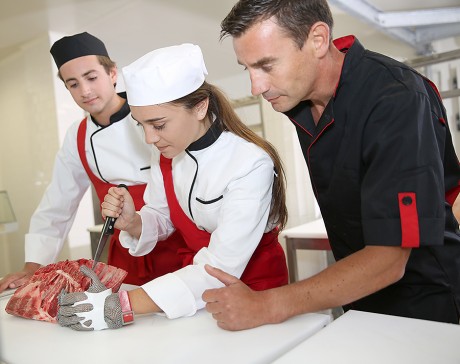 Award-winning training provider Cambrian Training Company, based in Welshpool, has been appointed to organise the butchery competition on behalf of WorldSkills UK. Entries open on Monday, February 9 and butchers have until March 20 to register at: http://worldskillsuk.org/competitions/national-competitions/professional-services/butchery

Regional heats or assessment rounds will take place between April and July and the six top scoring butchers from across the UK will qualify for the final to be held at The Skills Show, to be held at the NEC Birmingham from November 19 to 21.

The Skills Show is the nation’s largest skills and careers event and helps to shape the future of the next generation.

WorldSkills UK National Skills Competitions are designed to enhance apprenticeship and training programmes and improve and drive skills in the industry. Butchery is one of more than 60 skills to feature in this year’s competitions.

Having taken butchery apprentices to demonstrate their skills at the Skills Show every year since 2011, Cambrian Training Company was keen to add the vocation to the skills competition to raise the profile of skilful butchers across the UK.

The company also runs the annual Welsh Young Butcher Competition and contestants have expressed a desire to compete against peers on a national and international stage.

“Two of our apprentice butchers have recently been selected to represent Great Britain in an international competition, which has highlighted the few opportunities that exist for them to showcase their skills in the UK,” explained Arwyn Watkins, Cambrian Training Company’s managing director.

“It’s important that butchery is represented as a skill at WorldSkills UK because it’s a real craft that needs to be benchmarked and promoted. Its inclusion for the first time will be a great tool to raise the industry’s standards and profile.

“WorldSkills is like the Olympics of the skills world and is very big news in vocational learning nationally and also in schools, colleges and other higher education and further education organisations.”