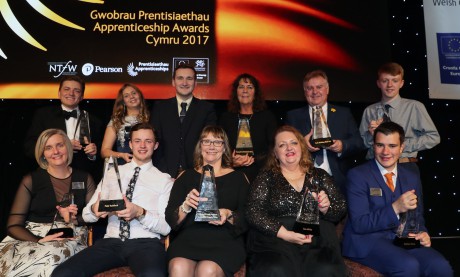 Inspirational individual success stories and a dynamic approach to training and skills development by employers and learning providers across Wales were celebrated as the winners of this year’s prestigious Apprenticeship Awards Cymru were announced last night (October 20).

Jointly organised by the Welsh Government and the National Training Federation for Wales (NTfW), the prestigious awards ceremony brought together 30 shortlisted finalists at the Celtic Manor Resort, Newport.

The awards, sponsored by Pearson PLC and supported by media partner, Media Wales, are designed to showcase and celebrate the outstanding achievements of learners, employers and work-based learning practitioners who have excelled in contributing to the development of the Welsh Government’s Traineeships and Apprenticeship programmes.

The awards were shared across Wales, with big names including Tata Steel sharing the limelight with small companies such as Happy Horse Retirement Home at Crai, near Brecon.

Tata Steel collected the award for Macro Employer of the Year, holding off the challenge of Deloitte LLP’s Cardiff office.

Medium Employer of the Year was Cyfle Building Skills, a shared apprenticeship programme for West Wales based in Ammanford. Shortlisted finalists were Electroimpact UK from Hawarden and Celtica Foods, Crosshands.

Happy Horse Retirement Home took the award for Small Employer of the Year, holding off the challenge of Newport’s Archway Court Nursery.

The awards for apprentices went to individuals from across Wales. Higher Apprentice of the Year was Mold butcher Peter Rushforth, who was delighted to add another trophy to his collection.

Foundation Apprentice of the Year was Sam Jones 32, from Pontypridd, who works for Wales & West Utilities. He had previously won Ambassador and Rising Star awards from his employer after creating ‘Sam the Sniffer Dog’, a retro-fit design cover for carbon monoxide home alarms to raise awareness of the silent killer.

Apprentice of the Year was Stephen Pickles, 19, from Llanrumney, who works for global engineering company, Renishaw in Miskin.

Two awards for young learners who have benefited from the Welsh Government’s Traineeship programmes completed the list of winners.
Jordan William Jones, 18, from Bangor collected the Traineeship Learner of the Year (Engagement) after setting out on a motor industry career with Tyn Lon Volvo in Llanfair PG.

The Traineeship Learner of the Year (Level 1) award went to Emily Wintle, 18, from Llanharry, who has overcome many challenges in her quest to become a nursery nurse.

Congratulating all the award winners and shortlisted finalists, Skills and Science Minister, Julie James, said: “This year’s finalists include exceptional individuals who have excelled in their workplace and learning providers and employers that have gone the extra mile to support the apprentices they are working with. Each has helped to set a gold standard in vocational training and this should be applauded.

“Apprenticeships are an essential ingredient of economic success and a vital tool in building a stronger, fairer and more equal Wales. The Welsh Government, with support from the European Social Fund, regards apprenticeships as an excellent way to build a skilled and competitive workforce, address skills shortages and strengthen the Welsh economy.

“Increasing higher level skills and developing skills pathways that benefit the whole of Wales has never been more important and we are committed to continuing the good work already underway with businesses, training providers and individuals to achieve this.”

Sarah John, NTfW chair, said: “These awards are the highlight of the year for everyone connected with the delivery of these successful Apprenticeship and Traineeship programmes. We are proud that Wales has the best Apprenticeship system in the UK.

“As a network we have fought, for many years, to achieve parity of esteem between vocational and academic qualifications. The Welsh Government’s pledge to create a minimum of 100,000 high quality, all-age apprenticeships over five years, with a focus on higher level skills and developing skills pathways, has certainly helped.

“However, the challenge remains to ensure school leavers in Wales are aware of all the career routes available to them – both academic and vocational. Only then will we achieve true parity of opportunity.”

Small Employer of the Year:
Happy Horse Retirement Home at Crai, near Brecon employs eight staff who care for 50 horses. Owners Nicky and Ray Van Dijk are passionate about developing staff through apprenticeship programmes delivered by Coleg Cambria, training nine apprentices in five years, most of whom have gone on to careers in the equine industry.

Medium Employer of the Year:
Cyfle Building Skills Ltd is a shared apprenticeship programme for the construction industry established 10 years ago in Ammanford. More than 140 contractors are engaged and 135 shared apprentices employed across West Wales, making it one of the largest employers of its kind in the UK.

Large Employer of the Year:
The Intellectual Property Office in Newport has recruited 32 apprentices since launching an apprenticeship programme in 2014. Nineteen are currently employed there and another 20 are being taken on this autumn as the company works closely with training provider Acorn Learning Solutions.

Macro Employer of the Year:
Tata Steel employs more than 6,300 people at its Wales-based operations, including 211 apprentices. Working with Bridgend College, the company has been training apprentices for more than 50 years to ensure there is a “ready-made pipeline of talent”.

Higher Apprentice of the Year:
Butcher Peter Rushforth, 22, who lives in Leeswood and works for Swans Farm Shop, Treuddyn, near Mold, has progressed from a Foundation Apprenticeship to a Higher Apprenticeship in Food Manufacturing Excellence with Cambrian Training Company. A former Welsh Young Butcher champion, he achieved a WorldSkills UK gold medal, represented the UK in a European contest and won a scholarship to America in the last year.

Foundation Apprentice of the Year:
Sam Jones, 32, from Pontypridd, is a build and replace apprentice with Wales & West Utilities where his training is delivered by Utilise T.D.S. Limited for Cardiff and Vale College. He won Ambassador and Rising Star Award Awards from his employer after creating ‘Sam the Sniffer Dog’, a retro-fit design cover for carbon monoxide home alarms to raise awareness of the silent killer.

Apprentice of the Year:
Stephen Pickles, 19, from Llanrumney, is an apprentice with global engineering company, Renishaw. He has completed a Mechanical Manufacturing Engineering apprenticeship through the University of South Wales and is the company’s first apprentice at Miskin to sign off nine projects all with technical folders.

Work-based Learning Tutor of the Year:
Ros Smith, 43, from Pontypridd, is lead motor vehicle tutor at ACT Training in Cardiff. Changing the lives of her learners is the ethos to which Ros has dedicated herself for more than 23 years as 96% progress to further learning or employment.

Work-based Learning Assessor of the Year:
Sue Jeffries, 61, from Pontcanna, Cardiff, used more than 30 years’ experience in TV production to start Sgil Cymru in Rumney, which specialises in apprenticeships in roles ranging from costume to special effects. She is lead assessor across three media apprenticeships and delivers flexible training to meet the demands of TV companies.

Traineeship Learner of the Year (Engagement):
Jordan William Jones, 18, from Bangor, works for Tyn Lon Volvo in Llanfair PG. Having lost both parents, he relocated to North Wales and has been encouraged by his aunt and uncle seek a motor industry career. His confidence has surged following a Traineeship Engagement programme with Grŵp Llandrillo Menai and he has now begun a Level 2 Diploma in Light Vehicle Maintenance and Repair.

Traineeship Learner of the Year (Level 1):
Emily Wintle,18, from Llanharry, has overcome dyslexia and many knockbacks on the way to becoming a valued member of staff at St Aubin Nursery in Cowbridge. With support from ACT Training, she completed her Level 1 Childcare Traineeship in three months and has now progressed to a Foundation Apprenticeship in Childcare.