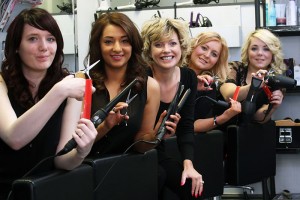 A hairdressing salon in Barry, which develops apprentices, has been shortlisted for a prestigious national award.

Head Office is one of 28 finalists in nine categories of the Apprenticeship Awards Cymru, organised by the Welsh Government in partnership with the National Training Federation for Wales (NTfW).

Changing the perception of a professional hair salon and raising the profile of the industry to reflect the true skills and complexities of the profession are just a few reasons why Head Office has fully grasped its own Apprenticeship programme. The salon is a finalist in the Small Employer of the Year categor

Salon, owner Jane Kelly currently employs four apprentices and covers all aspects of hairdressing, from traditional, modern-commercial, through to avant-garde and session work for competitions.

“We are a progressive salon and we get our motivation from embracing change and being determined to grow,” said Jane who believes the industry is better suited to having a work-based learner.

Jane believes apprentices learn more about all aspects of the profession by being part of it, rather than being taught just the fundamentals in a classroom. Foundation Apprenticeship and Apprenticeship programmes bespoke to the salon and industry’s needs were a must in her opinion.

“I began to worry that no hairdressers would be coming up through the ranks who were fit for the job and it was seriously affecting the industry standards,” said Jane.

“It’s great to have more control to train a candidate to our own standards. When we recruit them we know what we are getting and they know what to expect.”

She feels passionately about the Apprenticeship programme, which is delivered by ACT Training. “The programme has highlighted to me the need to support young people in the right way; in an environment that they can grow in and gain self-respect from achieving small goals one step at a time,” she added.