Talented young chef is cooking up a storm 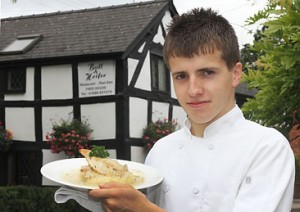 Talented Steven Owen, who is making a name for himself as Head Chef of a recently opened village pub restaurant in Mid Wales where his regular customers include ITV weather girl Sian Lloyd, has been shortlisted for a prestigious national award.

Steven, 19, from The Bull and Heifer, Bettws Cedewain, near Newtown, is one of 28 finalists in nine categories of the Apprenticeship Awards Cymru, organised by the Welsh Government in partnership with the National Training Federation for Wales (NTfW).

Sponsor of the Apprenticeship Awards Cymru, which aim to showcase excellence in skills development in Wales, is Pearson and media partners is Media Wales.

Steven has recently completed his Apprenticeship in Professional Cookery, which was delivered by Coleg Powys in Newtown and is looking forward to developing his career and possibly expanding the restaurant.

He began his apprenticeship in September last year at the Waggon and Horses, Newtown under the guidance of former National Chef of Wales winner Neil Roberts.

He had previously enjoyed a 200-hour work experience placement at the Waggon and Horses as part of his college course and worked there at weekends for several years, starting as a pot washer.

“I was given a fabulous opportunity in November 2011 by owners Gwyn and Ann Evans to be involved in the opening of the new restaurant,” he said. “I have used all the knowledge and skills that I have gained during my three years at college to design menus incorporating local and seasonal produce wherever possible .The feedback I have received is very positive.”

The Bull and Heifer is now one of the most successful new businesses in the area. Such is the demand for a table in the 35-cover restaurant that reservations are taken for up to three weeks in advance.