James Matthewman has seen his career at Maesteg Golf Club head straight down the middle of the fairway since teeing off with an apprenticeship. 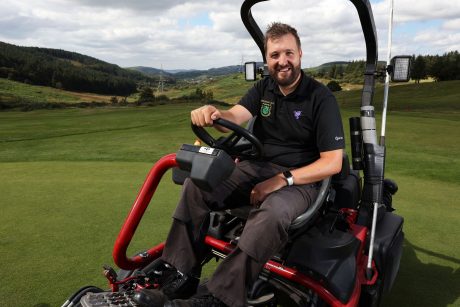 Not only has he completed an Apprenticeship in Sports-turf Management and Horticulture, delivered by Bridgend College, but he has been promoted to deputy head greenkeeper and won a scholarship from the British and International Golf and Greenkeepers Association (BIGGA), a reward for his continuing professional development.

Proud of the scholarship, one of only five awarded in the UK and Ireland, James, 36, from Maesteg, was also named Work-based Learner of the Year by Bridgend College – the first award he had ever won – for achieving English and Mathematics qualification associated with his apprenticeship.

Continuing his quest for learning, he is now working towards an Apprenticeship in Leadership and Management with the Chartered Management Institute (CMI) and is also improving his Welsh language.

In recognition of his successful learning journey, James has been shortlisted for the Apprentice of the Year Award at the prestigious Apprenticeship Awards Cymru 2022. The winners will be announced at a virtual awards ceremony on November 10.

The awards highlight the outstanding achievements, during unprecedented times, of employers, apprentices and work-based learning practitioners.

Highlight of the year for apprentices, employers and work-based learning providers and practitioners, the awards are organised by the Welsh Government and supported by the National Training Federation for Wales (NTfW). Headline sponsor for the third year is Openreach.

James promotes Maesteg Golf Club on social media, producing tutorial videos to highlight improvements to the course and future plans, which has helped to boost membership from 300 to more than 500.

Due to this success, he was appointed to run the social media account for BIGGA’s South Wales section which has increased networking with greenkeepers at other golf clubs.

“Greenkeeping is a highly skilled job and can be extremely satisfying, but also requires a massive amount of learning,” he said. “That is why I thought the apprenticeship route was perfect.

“Even though I had already completed a lot of machinery and equipment training, there is still a vast amount of knowledge you need to be able to produce an outstanding golf course. Maesteg Golf Club is a fantastic complex that has great potential.”

James has worked with his manager Stephen Trickey to develop a five-year plan to manage the golf course sustainably, setting side some uncut areas to boost wildlife and also save on fuel costs.

“Due to his outstanding achievements, not just in his role, but as an individual, the club promoted him to deputy head greenkeeper.”

Congratulating James and all the other shortlisted finalists, Economy Minister Vaughan Gething said: “Apprenticeships make a huge contribution to our economy and will be crucial as Wales continues to bounce back from the pandemic.

“They can help futureproof, motivate and diversify a workforce, offering people the chance to gain high-quality vocational skills.

“As part of our Young Person’s Guarantee, the Welsh Government will be investing £366 million over the next three years to deliver 125,000 all-age apprenticeships across Wales during the current term of government.

“We want to increase opportunities for people of all ages and backgrounds to develop transferable skills in the workplace and improve their lives. The investment will also help tackle skills shortages and gaps in priority sectors critical to drive productivity and economic growth, supporting our net zero ambitions, the every-day foundational economy and public services.”

The Apprenticeship Programme is funded by the Welsh Government with support from the European Social Fund. For more information about recruiting an apprentice, visit: gov.wales/apprenticeships-genius-decision or call 03000 603000.