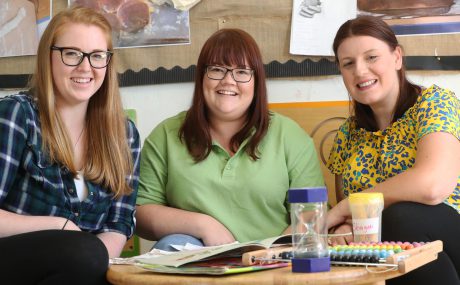 Abigail Hathway is grateful to her parents for deciding to have her educated through the medium of Welsh from the nursery onwards.

Thanks to her ability to speak Welsh, she has landed a job she loves at Meithrinfa Si-Lwli, a Welsh medium nursery in Whitchurch, Cardiff, which was named Nursery of the Year for Wales in 2018.

She has also completed a bilingual Apprenticeship in Children’s Care, Learning and Development through learning provider Educ8 and hopes to progress to further qualifications. The Apprenticeship Programme is funded by the Welsh Government with support from the European Social Fund.

“I wouldn’t have this job if I was unable to speak Welsh,” said Abigail, 27, who lives in Tonypandy. “Because I hadn’t spoken Welsh for a long time before getting this job, I struggled with the written work for my apprenticeship, so I did the written work in English and the observations in Welsh.

“I think it’s really important to have the option to do these qualifications through the medium of Welsh.

“I love being able to speak Welsh at the nursery and with friends. At school, it wasn’t seen as cool to speak Welsh, but attitudes have changed and the ability to speak the language now opens so many doors.

“It was my parents’ decision to have me educated in Welsh, even though they don’t speak the language themselves. I am very grateful to them.”

After leaving school with ‘A’ levels, Abigail studied psychology at university for 18 months before illness forced her to leave the course. She then became involved in caring, working with a disabled child in her home for four years before moving on to caring for adults with special needs for two years.

She secured the job at Meithrinfa Si-Lwli three years ago and is very happy working there.

Meithrinfa Si-Lwli’s acting manager, Sophie Lewis, speaks highly of Abigail. “She is lovely and has got a really good rapport with the parents, families and the children. It’s obvious that she enjoys the job which is nice to see.”

Like Abigail, Sophie comes from an English speaking home but was educated in Welsh, which helped her secure her current position.

She has recently completed most of a Higher Apprenticeship in Children’s Care, Learning and Development Level 5 in Welsh, with only a few conversations with the tutor in English. She now aims to progress to a leadership and management qualification to support her job.

“I think it’s good to get children speaking Welsh from the start of their education,” she said. “I wouldn’t be where I am today without the Welsh language.”

Abigail’s assessor, Rhian Weeks, of Educ8, said: “Abigail was really easy to work with. Being a Welsh speaker myself, I was able to go into the nursery setting, observe and capture everything naturally and in a comfortable way.

“She works through the medium of Welsh and is very imaginative and creative when planning activities for the children and thinking outside of the box.

“I think it’s very important for apprentices to be given the opportunity to learn through the medium of Welsh because it means they don’t have to change their terminology and their best practice can be captured.”