Bricklayer Ifan is building for the future with bilingual apprenticeships 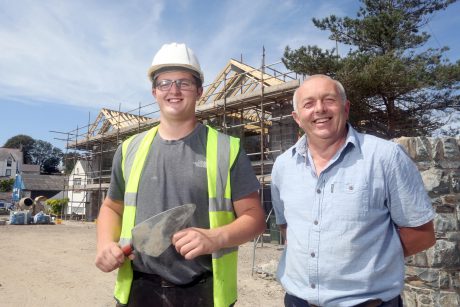 Ifan Williams with his father Meurig at work.

Bricklayer Ifan Williams is a role model and bilingual apprenticeship ambassador for the CITB in Wales after winning a series of gold, silver and bronze medals in competitions over the past three years.

The talented and modest 19-year-old from Llangwnnadl, near Pwllheli works for his father Meurig, who is a partner in general building firm M & W Williams Ltd at Botwnnog.

He has completed a bilingual Foundation Apprenticeship and Apprenticeship in Brickwork with the CITB through Coleg Meirion Dwyfor in Dolgellau and has made a name for himself in bricklaying competitions in Wales and the UK. The Apprenticeship Programme is funded by the Welsh Government with support from the European Social Fund.

Ifan has used both his first language of Welsh and written English to complete the qualifications and last year was named CITB Apprentice of the Year for Wales 2018.

His most recent competition success came last November at The SkillBuild 2018 UK National Final where he won a silver medal for bricklaying, which he added to golds received at North Wales Regional Skill Build and Guild of Bricklayers Welsh Sector contests in 2018.

Diagnosed as being mildly dyslexic at school, which made him unable to concentrate on his work, Ifan has surprised even his father by his progress in the building industry.

“I am amazed by his success, to be honest,” said Meurig. “We are based in a rural area and he has done so well to put himself on the map. Ifan has worked with me since he was very small and has picked up the skills naturally. It doesn’t seem to have been a strain on him to achieve what he has done.

“He has had great help from the college and the CITB. I think it’s very important that apprentices like Ifan have the chance to learn bilingually because we deal with Welsh and English speaking clients in our business.”

Ifan said he was enjoying following in his father’s footsteps and was grateful for the opportunity to work towards the apprenticeships in bricklaying at college.

“It was easier for me to do the qualifications bilingually because I thought it would have been difficult for me to do them in Welsh only,” he added. “The college and CITB were very good with me.

“I have now finished the competitions, having left college and am enjoying getting on with the building work.”

His advice to school leavers who are seeking a career this summer is to seriously consider a bilingual apprenticeship. “You can earn while you learn and it’s up to you what language you want to do the apprenticeship in,” he added.

CITB area delivery manager for Wales, Paul Marsh said: “Ifan has excelled in both his work and college environments to generate skills that are truly compatible with the demands of a modern construction industry.

“The ability to complete his qualifications bilingually has been an essential element of his learning journey that has paid considerable dividends in his learning experience.”