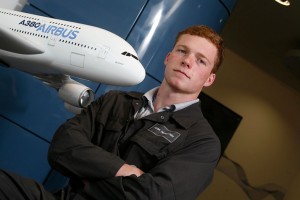 Two talented apprentices, who are on course for high-flying careers with leading Welsh company Airbus UK in Broughton, have been shortlisted for prestigious national awards.

Rhian Perrin, 21, from Coedpoeth, Wrexham and Ryan McAnerney, 20, from Saltney Ferry, are two of the 28 finalists in nine categories of the Apprenticeship Awards Cymru, organised by the Welsh Government in partnership with the National Training Federation for Wales (NTfW).

By completing a Higher Engineering Apprenticeship with Airbus UK Rhian has become a Women into Engineering role model. She visits schools, colleges and events to promote engineering as an exciting career for young women.

“I didn’t really think about a career in engineering until I was in the sixth form and I wish someone had come to my school and explained that it was not just a male environment,” she explains. “Engineering is open to everyone.”

Next up for Rhian, who left school with 12 GCSEs and three A levels, is a BEng honours degree in Aeronautical and Mechanical Manufacturing and further courses to improve her skills and knowledge as a design/stress engineer. 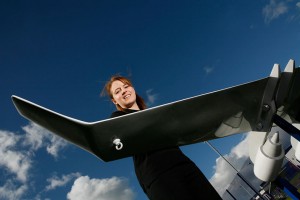 Her primary role at Airbus is to perform design analysis and stress justifications for deviations from drawings that occur in production. She has worked on important projects to upgrade two in-service A330 aircraft and a gear rib repair, which saved the company 850,000 Euros.

Ryan, an Aeronautical Engineering Craft Apprentice, is studying at Deeside College, where he is a Student Governor, representing all work based learners.

He has achieved a Foundation Apprenticeship in Engineering Operations with distinction and is now working towards an Apprenticeship, with the focus of becoming a qualified aircraft fitter by September 2014.

He previously achieved 14 GCSEs at A* to B grades, three A levels and a Foundation Apprenticeship in Engineering Maintenance/Operations, which he studied at The City of Bristol College.

“I worked hard to ensure an academic base to achieve my career aspirations,” explained Ryan. “My desire from an early age was to become an engineer to fulfil my fascination with aircraft, particularly the design, implementation and build.”

Working within the wing excellence team at Airbus UK, he is responsible for various duties including safety, quality, cost, delivery, people and all practical applications of engineering.