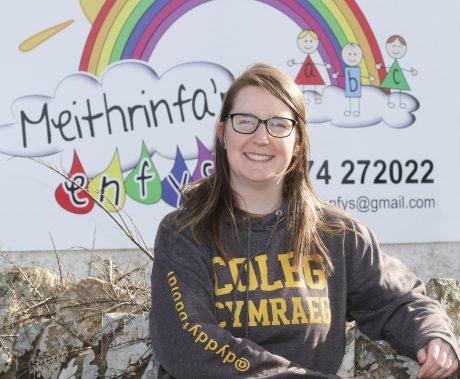 Nursery nurse Annwen Roberts is advising school pupils to research all their options before deciding what to do as a career.

Annwen, 28, from Cwmann, near Lampeter, chose to do a Degree in Childhood Development when she left school but now regrets not being aware of the option to do an apprenticeship instead.

“I think I wasted three years of my life to be honest because my degree didn’t result in anything,” she explained. “I wish I had researched the options available to me, as I would certainly have chosen an apprenticeship instead of going to university knowing what I do now.”

Annwen, who works for Meithrinfa Enfys, a nursery at Cross Inn, near Llanon, is working towards a bilingual Higher Apprenticeship (Level 5) in Leadership for Children’s Care, Learning and Development with learning provider Itec.

Because of her passion for apprenticeships and the Welsh language, she has been appointed an Apprenticeship Ambassador by Coleg Cymraeg Cenedlaethol (CCC) and the National Training Federation of Wales (NTfW).

Coleg Cymraeg Cenedlaethol leads the development of Welsh medium and bilingual education and training in the post-compulsory sector in Wales while the NTfW represents work-based learning providers across Wales.

As part of her role, Annwen enjoyed taking part in an Instagram takeover during Apprenticeship Week to show viewers what her work entails. She hopes to get involved in other activities to promote the Welsh language and bilingual apprenticeships when Covid-19 restrictions allow.

“I am proud to be promoting the Welsh language and apprenticeships,” she said. “I would like to get more people speaking Welsh, just like my partner who couldn’t speak Welsh when we met eight years ago but is now fluent in the language.

“Hopefully, I can contribute to helping achieve the Welsh Government’s target of one million Welsh speakers by 2050.”

Annwen gained experience working at nurseries in Cellan and Whitchurch, Cardiff before returning home to work five years ago. Her ambition is to become an inspector to ensure that all nurseries are run properly and provide the best opportunities for children.

“I just love being around children, encouraging them to explore their surroundings and challenge themselves,” she added.

She began her Higher Apprenticeship in November 2019 and has continued to work towards the qualification despite the tragic death of her father and the postponement of her wedding within a year. The wedding is now planned for next December.

Dana James, an Itec assessor, describes Annwen as a hard-working, proactive and positive young woman and an excellent Apprenticeship Ambassador.

“I think it’s extremely important that apprentices are given the opportunity to learn in the language of their choice,” she said.