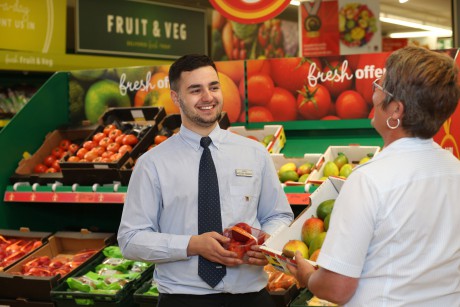 From starting an apprenticeship with one of the UK’s leading discount supermarket companies to becoming an assistant store manager, Corey Jones has taken it all in his stride.

Corey, 22, who lives in Wrexham, left school wanting to work while learning and has exceeded his own expectations since joining the Aldi Apprenticeship Programme, which is delivered with support from training provider First4Skills/ITEC.

He achieved a Level 3 Diploma in Retail Skills and has worked his way up from a store assistant in the first year to assistant manager of the company’s Mold store after completing store management training over the last two years.

Now Corey has been shortlisted for this year’s Apprenticeship Awards Cymru. He will be competing to become Apprentice of the Year at the prestigious awards ceremony at the Celtic Manor Resort, Newport on October 20.

Jointly organised by the Welsh Government and the National Training Federation for Wales (NTfW), the coveted awards are sponsored by Pearson PLC and supported by media partner, Media Wales.

Thirty star learners, employers and learning providers involved in the delivery of successful skills programmes across Wales have been shortlisted for the Apprenticeship Awards Cymru.

Corey said: “My development has contributed to Aldi’s objectives within store in many different ways. I am focussed on all key performance indicators and set up plans and targets to ensure that the store achieves its targets.”

In his final year, realising the importance of the skills and training he has acquired, he became a mentor for a new apprentice.

“As I was coming to the end of my apprenticeship, I wanted to be as involved as possible in his training to help him achieve the same success that I have with Aldi,” added Corey.

Alice Lees, Aldi’s area manager, said: “Corey’s main focus is always to use what he has learnt to improve the store. He has shown consistent commitment to the apprenticeship programme which ultimately led to him being offered the position of assistant manager.”

Praising the standard of applicants this year and congratulating Corey on being shortlisted for an award, Skills and Science Minister, Julie James said: “This year’s shortlisted entrants include exceptional individuals who have excelled in their workplace and learning providers and employers that have gone the extra mile to support the apprentices they are working with. Their stories never cease to amaze and inspire.

“Apprenticeships and vocational skills training are essential ingredients of economic success and vital tools in building a stronger, fairer and more equal Wales.

“These awards provide a perfect platform to celebrate success and reward the hard work and dedication of learners, employers and training providers across Wales. I wish everyone the very best of luck for the night.”