Apprentice Jess developing her dream career through the medium of Welsh 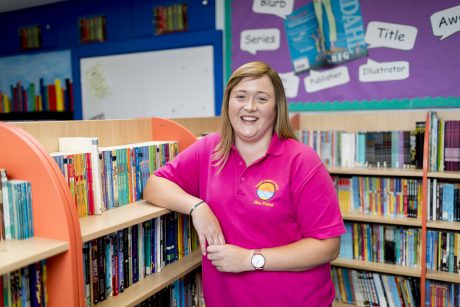 Apprentice Jess Prince has landed her dream job at a Tenby primary school and is reaping the rewards of Welsh medium education and training.

Jess, 23, from Saundersfoot, works as a learning support assistant at Ysgol Hafan y Mor and is preparing to start her third year in September at the Welsh medium primary school.

She joined the school after completing an Early Years Education and Care course at the University of Wales Trinity St David, Carmarthen, which was partially delivered in Welsh. She is now half-way through an Apprenticeship in Childcare, which is being delivered wholly in the Welsh language by Pembrokeshire College. The Apprenticeship Programme is funded by the Welsh Government with support from the European Social Fund.

Ninety-six per cent of Ysgol Hafan y Mor’s pupils are from non-Welsh speaking homes, but their parents are very supportive of the school, which has seen its roll increase from 109 to 173 since it opened nearly three years ago.

Jess said she had always been encouraged by her parents, who don’t speak Welsh, to be educated in her native language. She attended Welsh medium schools and was keen to continue her education and training in the language.

“Being able to speak Welsh has the potential to open so many doors and learning in the language comes more naturally to me now,” she explained. “I want to carry on learning through the medium of Welsh and I think it’s really good to encourage people who want to do their apprenticeship in Welsh.

“Doing an apprenticeship in Welsh keeps your written Welsh going, which is important because it is different to the spoken language.”

She hasn’t yet decided what qualification will be next on the list when she completes the apprenticeship but aims for progression and might consider training as a teacher in the future.

“I really enjoy my job because I like seeing the children learning and progressing through the school,” added Jess, who steps up from assisting the infants’ class to key stage two in September. “I am taking the apprenticeship to be the best I can be for the children.”

“Her Welsh medium education has been invaluable to our school and her Apprenticeship in Childcare is going to add another string to her bow because she will be able to go into our Cylch Meithrin setting where we have a waiting list. She has been able to learn in the workplace with support from Pembrokeshire College which has been fantastic.

“Trying to recruit Welsh speaking teachers and learning support assistants in our area is an extremely hard task. Therefore, it’s vitally important that we continue to educate and train people through the medium of Welsh.”

“Jess is doing her assessment through the medium of Welsh which is something we are trying to encourage more learners to do,” said Janice. “She wanted to ensure that she was proficient in both Welsh and English languages because a high percentage of her pupils are from a non-Welsh background.

“When we have apprentices, who are working in a predominantly Welsh language environment, we do encourage them to take up the option to complete certain elements through the medium of Welsh.

“It’s very important that people like Jess continue to use and develop their Welsh language skills so that they maintain their confidence level and use the language proficiently in the working environment. If you don’t use the language, you lose it.”
The role of Ryan Evans, the National Training Federation for Wales’ bilingual champion, is to support the apprenticeship training providers to work towards Welsh Government’s vision for one million Welsh speakers by 2050.