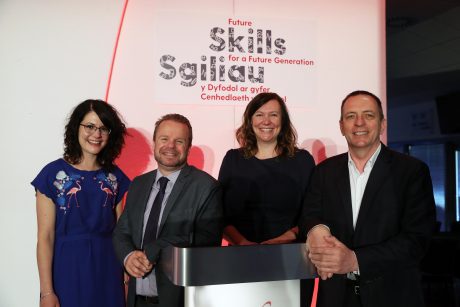 An organisation that represents work-based learning providers across Wales is calling on the Welsh Government to increase its apprenticeship budget over the next two years to meet future demand.

Chair Sarah John made the call at the National Training Federation for Wales’ (NTfW’s) annual conference at Cardiff City Stadium where she explained that the investment was needed to sustain existing provision and to fund more technical and professional apprenticeship programmes.

The new programmes in health and social care, construction and ICT are being created as a result of work carried out by Qualifications Wales.

“If we are to deliver the high quality programmes needed, then there needs to be an acceptance by Welsh Government that they cost more to resource, not just equipment but also people,” she said.

“To recruit professionals in priority sectors means we have to compete with the salaries they are currently being paid and that can be a barrier to meeting demand. Therefore, support for capacity building is needed in order to find, train and prepare new tutors and assessors, alongside a method to review resources available across the whole post 16 sector.”

She also called for greater cross departmental skills planning by the Welsh Government. “To meet the future demands of the Welsh workforce, we believe that meetings with employers’ cluster groups, established by the Welsh Government’s economic development team, and potential inward investors will enable better planning of provision,” said Ms John.

“Now, more than ever before, there is a requirement for a cohesive approach to skills policy across government departments to make best use of the resources we have in Wales to meet the future skills needs of our economy.”

Ms John also called for a continued collaboration between the NTfW and Welsh Government officials to achieve apprenticeship policy.

The conference, ‘Future Skills for a Future Generation’, focused on the need to equip employers and individuals with the evolving skills needed by the future Welsh workforce which would be faced with the challenges of automation, artificial intelligence and digitalisation.

Ken Skates, Minister for Economy and Transport, addressing delegates via a recorded video, said NTfW members ought to be proud of their “remarkable” effort in helping the Welsh Government towards its target of creating 100,000 quality apprenticeships during its current term of office.

He pledged the Welsh Government’s long-term commitment to employability and skills training, including apprenticeships, with a strong focus on improving quality. He said the number of apprenticeship frameworks could be reduced to 23 and there would be a future focus on technical and craft occupational areas.

As part of the Disability Action Plan, learning would be inclusive with apprenticeships and equality of opportunities for disabled people. He launched at the conference new materials to help work-based learning practitioners to recruit disable apprentices. An Employer Contract would also focus on how companies contribute to the health and wellbeing of their workers and wider community.

To make it easier for individuals to get the right employability support at the right time, he had launched Working Wales to provide expert advice.

Huw Morris, the Welsh Government’s director of skills, higher education and lifelong learning, said Wales was entering a period of substantial change and he outlined a five-point skills plan to meet future challenges.

The plan included: one skills system for post 16 learners in Wales; a right to lifelong learning; three Regional Skills Partnerships to each prepare a three-year skills plan; the establishment of a Commission for Tertiary Education and Research to develop a highly skilled society that tackles inequality; the changes to be implemented within five years following consultations, which will begin this autumn.

Heledd Morgan, lead changemaker at the Office of the Future Generations Commissioner for Wales, said it was predicted that by the 2030s, 112,000 jobs in Wales would be at risk from robots and automation and 65% of today’s schoolchildren would be in jobs that don’t exist currently.

It would be important for people to have transferrable skills that were difficult to automate, she added.