Apprenticeships are a fantastic return on government investment

Apprenticeships are a fantastic return on government investment
By Arwyn Watkins, chief executive of the National Training Federation for Wales (NTfW) 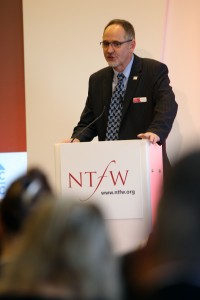 Latest figures for work-based learning in Wales make excellent reading for everyone involved in delivering apprenticeship programmes. The figures show a dramatic rise in the number of people starting an apprenticeship, which is a gateway to future career opportunities.

The NTfW is delighted to see these very positive figures, as our members are responsible for delivering work-based learning programmes on behalf of the Welsh Government. Our often much maligned politicians in Cardiff are to be commended for their wholehearted support of apprenticeships to drive up skill levels in Wales.

The latest figures vindicate this support and provide the Government with, to use Deputy Minister for Skills and Technology, Ken Skates’ own words, “a fantastic return on its investment”.

The Deputy Minister is a passionate supporter of high quality work-based learning programmes and shares the NTfW’s long held view that it’s high time apprenticeships are given parity of esteem with academic qualifications. It’s going to take time to overcome that particular barrier in the minds of some teachers and parents, but attitudes are beginning to change.

I was delighted to read that the Deputy Minister credits apprenticeships with playing a key role in driving down youth unemployment in Wales and giving young people good reason to be optimistic about their future.

Skills training needs to be of the highest quality and our network of providers in Wales is delivering outstanding framework success rates in comparison to the rest of the United Kingdom, but we must not be complacent.

In the last 12 months, we have made a commitment to more apprentices than in the previous 48 months. We have opened up a considerable number of new apprenticeship frameworks, including Higher Apprenticeships and engaged with employers who have never considered an apprenticeship programmes as a solution for skills development within their business.

We are determined to champion, challenge and celebrate work-based learning in Wales to be the best that it can be, helping everyone reach their full potential.

In a jobs market where what you earn depends on what you learn, our key priorities remain apprenticeships, higher standards and better qualifications. It’s imperative that when an apprenticeship commitment is made the programme is rigorous and responsive to the needs of employers.

Many businesses are now changing the way they work, looking to raise standards, championing the use of well-assessed, well respected qualifications that accurately register the skills and competence of learners on an apprenticeship programme. For the sake of our apprentices, employers and the economy this requires real commitment and accountability, all set within a framework that enables portability.

The recent Organisation for Economic Co-operation and Development (OECD) report has shown us that, like it or not, whilst still competing with traditional powers in Europe and North America, there are rising powers in Asia, South America and the Middle East.

The report highlighted that in Britain today our young people are less competent in the basics of literacy and numeracy than our older generation. This cannot continue. As we look to improve our skills system, we must improve the basic skills for all who need it.

The Welsh Government has recently published an important consultation document setting out proposals for future co-investment in post 19 adult skills delivery. Responses are requested by May 16 and the NTfW is keen that Government hears the views of employers of different sizes from a wide range of sectors within Wales.

To truly create the world class skills system, that we have all been talking about for so long, we need to build on the foundation that we have established and commit to priorities that will lead to progression for individuals, a skilled labour market and sustainable growth.

We all need to own our future skills system and champion it with pride.