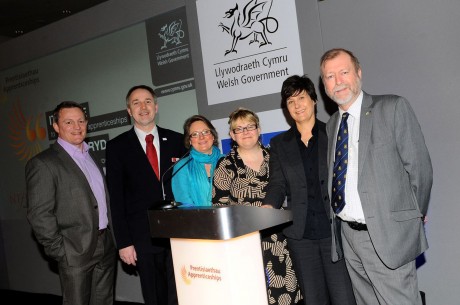 The Welsh Government has urged employers across Wales to engage in Apprenticeship programmes to promote renewed economic growth and business prosperity.

The call came from Deputy Minister for Skills Jeff Cuthbert at a business breakfast event in Cardiff, attended by 200 employers and training providers to celebrate National Apprenticeship Week.

Themed ‘IT’S TIME to talk Apprenticeships, the event was organised by the Welsh Government in partnership with the National Training Federation Wales (NTfW) and Pearson Work Based Learning to raise awareness of the positive impact that Apprenticeships make to individuals, businesses and the wider economy.

Training providers contracted by the Welsh Government have been challenged to raise the profile of Apprenticeships not only within businesses they currently work with but also with those not engaged in programmes, as part of their business development and succession strategy.

Mr Cuthbert announced that the Welsh Government has committed a further £20m a year to the Apprenticeship budget for the next two financial years, part funded by the European Social Fund.

“This reinforces our dedication to strengthen the conditions that will enable business to create jobs and sustainable economic growth and to tackle poverty,” he said.

“As a result of the global economic situation, Wales is facing challenges that have not been felt for several generations. One of the biggest challenges is ensuring that Wales’ young people are provided with opportunities to equip themselves with the right skills to help ensure that they can maximise their employment prospects in the future.

“Secondly, we need to promote renewed economic growth and prosperity for Welsh businesses. Building an Apprenticeships programme that delivers to its maximum potential is highly relevant to increasing the chances of meeting both challenges successfully.

“Some employers say that they’re reluctant to become involved in training because it’s easier to just go out and buy the skills they need to grow and to thrive, if necessary by looking abroad. But that’s a short term fix not a long term solution to skills shortages.”

He paid tribute to employers who were “powerful advocates” of training among other businesses in their own sectors and stressed that Apprenticeships were a key mechanism to business competitiveness.

He outlined a package of Welsh Government initiatives, suited to the needs of employers, learners and the Welsh economy, to support businesses to take on apprentices.

He also launched this year’s Apprenticeship Awards in Wales, which are designed to recognise and reward best practice in the use of Apprenticeships for learners, employers and providers. The awards ceremony will be on October 18 at the Celtic Manor, Newport.

Dr Thomas outlined the critical importance of leadership in every business and organisation. Louise Terry spoke about the challenges successful delivery of Apprenticeships can bring and what changes The Royal Mint is making within its organisation to improve its programme.

Elid Morris and Bridget Moseley, from Regional Learning Partnership South West Wales, outlined some of the findings of a research report on Apprenticeships and Higher Apprenticeships in South West and Central Wales. The report will be published in April.

Mr Watkins thanked all employers for attending and welcomed the additional funding support for Apprenticeship programmes from the Welsh Government. “In excess of 80 per cent of UK employers who are currently engaged in the delivery of Apprenticeships are very satisfied and I would say the percentage is even higher in Wales,” he said.

“This is the first time in seven years that we have been able to grow Apprenticeship opportunities,” he said. “I would appeal to employers to help us future proof the planning of Apprenticeships in Wales.”

Judith Cook, Pearson Work Based Learning’s national account manager for Wales, said the company was delighted by the attendance at the breakfast event and looked forward to its continued partnership with the NTfW.

“We are absolutely committed to Apprenticeships as we believe that they are the flagship for training the future workforce,” she added.