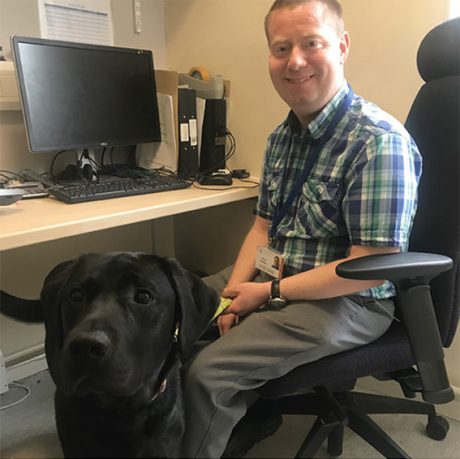 David Chaffey, 35, from Ebbw Vale, is a switchboard operator at Aneurin Bevan Health Board, Ebbw Vale and the Royal Gwent Hospital, Newport. David completed his Level 2 Diploma in Customer Service, working and completing training at his workplace.

David is registered blind having lost most of his sight as a child, he is assisted by his wonderful companion KP, a black two-year-old Labrador guide dog.

David’s main duties within his job role are taking inbound calls, signposting people to the correct department and taking emergency calls. The health board have supported David within his role by purchasing JAWS (Job Access With Speech) software. This provides a speech output of the inbound telephone number and the number David dials. They have also arranged transport for David to and from the hospitals with Access to Work.

David’s initial perception of Apprenticeships was that they were for traditional routes such as electricians and mechanics. He had no idea that administration and customer service were also a route people could take. David has taken a wealth of knowledge from his Apprenticeship and feels this has given him a real sense of confidence within his role. At first, David was a bit apprehensive but with the help of his assessor, he was able to complete his units by voice recordings instead of typing his evidence.

David’s busy lifestyle outside of work sees him as a divisional officer in Ebbw Vale of the St Johns Ambulance Wales, he trains dressage horses and has even received the British Empire medal in 2016 for services to the NHS, and to voluntary and charitable services.

As a member of the health board’s Disability Advisory group, David has also carried out awareness training for the board on visual impairment and is a member of the Organ and Tissue Donation committee which is a cause he holds dear due to receiving a heart transplant himself in 2011.

David plans to continue with the Aneurin Bevan Health Board and hopefully go on to study for his Customer Service Level 3 with t2 group.