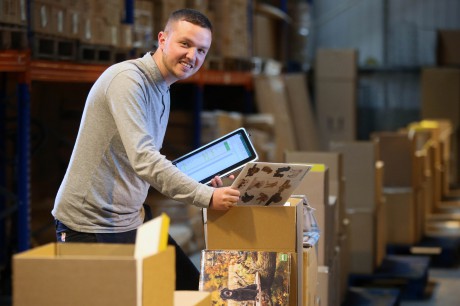 Adam Harvey has used apprenticeship programmes to develop his career.

Adam Harvey has used the Welsh Government’s apprenticeship programme as a springboard to develop an exciting career with a Welsh company specialising in products for the pet retail trade.

Since joining Magnet & Steel, Llandow as a general warehouse operative in 2007, he has been promoted through the ranks to operations director due to his outstanding contribution to the growing business.

As a reward for his success, he has been shortlisted for the Higher Apprentice of the Year Award at this year’s Apprenticeship Awards Cymru, which take place at Venue Cymru, Llandudno on October 20.

Jointly organised by the Welsh Government and the National Training Federation for Wales (NTfW), the prestigious awards celebrate the outstanding achievements of individuals, employers and learning providers who have excelled in contributing to the development of the Welsh Government’s Traineeships, Jobs Growth Wales and Apprenticeship programmes.

Funded by the Welsh Government with support from the European Social Fund, the awards are sponsored by Pearson PLC and supported by media partner, Media Wales.

During his Higher Apprenticeship, Adam worked with the human resources department to write and introduce new recruitment and training policies, which have reduced staff turnover and costs and improved business performance.

He also helped develop and launch an award winning 3D product called ‘Handipod’, an all-in-one hand sanitiser and pet bag dispenser, which has allowed the company to diversify into new markets worldwide. To increase sales, he has introduced new distribution channels on ebay, Amazon and social media.

“The apprenticeships have definitely improved my employment prospects and I now have the qualifications to accompany my experience,” said Adam, a 2014 Inspire Adult Learning award winner. “I’d like to show other learners that you can leave school at 16 and still progress up the ladder in the world of work.”

Phil Cartledge, Magnet & Steel’s managing director, said: “Adam is a fantastic success story and shows how much can be achieved by a dedicated individual through an Apprenticeship.”

Wales’ Minister for Skills and Science Julie James congratulated Adam and the other 32 shortlisted award finalists. “We are proud to be delivering one of the most successful apprenticeship programmes in Europe with success rates in Wales remaining well above 80 per cent,” she said.