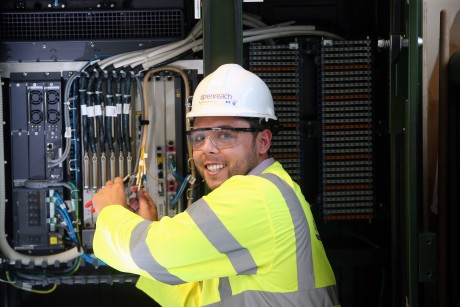 A 22-year-old Rhoose man, who is managing a team of 26 telecom engineers and responsible for hundreds of thousands of pounds worth of business, is in contention to win a major award at the Apprenticeship Awards Cymru 2015.

Drew Barrett, who works for Openreach, is one of three finalists shortlisted in the Apprentice of the Year category at the high profile awards ceremony to be held at the Celtic Manor Resort, Newport on Thursday, October 29.

Drew’s rise through Openreach has been an “astounding achievement” according to his boss. He left school with nine GCSEs and thought about joining the military but changed his mind and applied for an apprenticeship with Openreach

His training took place in-house at BT’s training centres across the UK, with theory courses being delivered by Newport-based Acorn Learning Solutions.

As part of the Apprenticeship in Telecommunications Engineering, Drew gained NVQ level 3 in Telecom engineering, a BTEC diploma and an Essential Skills Wales qualification.

“After leaving school I worked part-time and thought joining the military was going to be my path in life, but I decided to follow another route and ended up applying for an Apprenticeship with Openreach,” he explained.

“I thought this would offer me a variety of new skills and knowledge and I knew the training would be to the highest quality and would secure me a lifelong career in telecoms.”

During his second year on the Apprenticeship, Drew volunteered to cover an assistant manager’s role for a month. Following on from this, he was selected to cover more managerial positions.

“Being young and new to the business, I never thought I’d be able to cover several managers’ positions,” he said. “But opportunities became available to me and I have grabbed them with both hands.”

As a result of his dedication and hard work, on completing his Apprenticeship in January 2015, he was offered an operational manager’s role.

“The Apprenticeship has really motivated me and given me confidence,” he added. “I’ve been on a huge journey since joining Openreach as an apprentice and I’m now a manager who deals with people, effectively coaching, supporting and improving their performance.

James Williams, operational performance manager with Openreach, said: “Drew was the acting manager of the busiest, most successful patch within Wales for the majority of his Apprenticeship, which is an astounding achievement.

“He is a key contributor to the success of our business and would be a worthy winner of Apprentice of the Year – he has a fantastic future ahead of him.”

Deputy Minister for Skills and Technology Julie James congratulated Drew and the other 36 award finalists. “We have some truly exceptional apprentices here in Wales and the Apprenticeship Awards Cymru provide a perfect platform for us to celebrate their hard work and achievements,” she said.