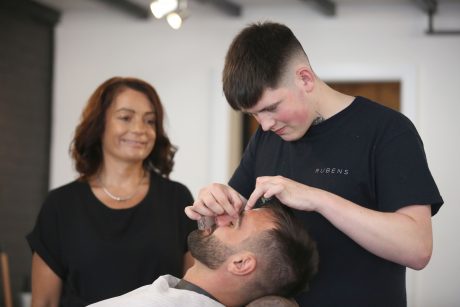 A Foundation Apprenticeship in Barbering has helped give Gavin Williams the skills to turn around his life, which hit rock bottom following his father’s death.

Gavin, 20, from Llandegfan, who works from Rubens Male Grooming salon in Llanfair PG, where he rents a chair, “fought his demons” before securing a barbering career which has been life changing.

He developed his skills by completing a Foundation Apprenticeship in Barbering delivered by Busnes@LlandrilloMenai and plans to progress to an apprenticeship, which will enable him to offer a shaving service using a traditional barber’s blade and share the skills with other apprentices.

“I have managed and overcome many aspects of my life that have caused barriers,” explained Gavin. “I have been at rock bottom, fought my demons and secured a career that I am good at and feel passionate about.”

Now Gavin’s learning journey has been recognised, as he has been shortlisted for the Foundation Apprentice of the Year Award at next month’s Apprenticeship Awards Cymru, the annual celebration of outstanding achievement in training and apprenticeships.

Thirty-four finalists in a dozen categories are in the running for the prestigious awards, which will be presented at a high-profile ceremony at the new International Convention Centre Wales, Newport on October 24.

After leaving school, Gavin attended the Military Preparation College (MPCT) in Bangor, but the loss of his father to cancer led to him becoming addicted to illegal drugs. Being kicked off his course as a result proved to be pivotal to cleaning up his life.

He began the foundation apprenticeship at Kai’s Barbershop in Bangor before moving to Rubens Male Grooming this summer, where he is building a growing clientele.

“The barbering apprenticeship has changed my life for the better,” said Gavin. “It has improved my barbering skills, work ethic, professionalism and communication skills. I could never have imagined being where I am today without the apprenticeship.

“The barbering apprenticeship has given me a goal in life that was much needed.”

Joanna Lewis, a Busnes@LlandrilloMenai Training Officer, said: “Gavin is one of the best Level 2 apprentices that I have worked with and has excelled with his skills. He’s a very inspirational and likeable young man who has worked hard to turn his life around.”

Minister for the Economy and Transport, Ken Skates, congratulated Gavin and all the other shortlisted finalists.

“Our Welsh Government’s Apprenticeships and Traineeship programmes are helping increasing numbers of people to gain the skills and experience that we know businesses across all sectors of the economy in Wales really need,” he said.