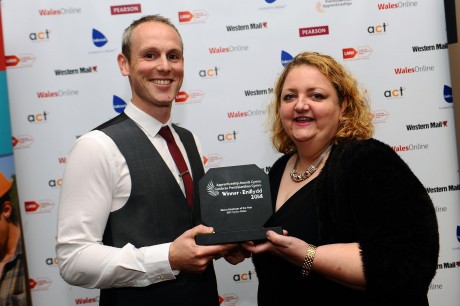 Based at the Roath Lock production facility in Cardiff, BBC Cymru Wales was named Macro Employer of the Year at the Apprenticeship Awards Cymru 2014 ceremony, held at the Celtic Manor Resort, Newport on Friday (October 31).

“Winning this award means an amazing amount and it’s a huge honour and privilege,” said Tom Morrey, talent manager at the BBC Cymru Wales. “We are trying something in the industry that hasn’t been tried anywhere else and it’s vindication that we are doing a good job.

“As the BBC we should be trying to do big things and I hope this award will encourage them to expand their apprenticeship programme to take on more apprentices.”

The awards, divided into 13 categories, are organised jointly by the Welsh Government and the National Training Federation for Wales (NTfW) and showcase excellence in skills development in Wales by learners, employers and learning providers, Sponsor is Pearson PLC and media partner is Media Wales.

The development of the BBC’s drama department in Wales meant the organisation needed to tap into a creative and dynamic workforce capable of meeting the standards required in television production.

The establishment of the Roath Lock production facility resulted in the creation of an Apprenticeship Programme in Drama which has proved a success for the BBC since it was established.

“We needed to develop a way of ensuring we could nurture and develop a local workforce where we had key skills gaps,” said Mr Morrey, talent manager at the BBC. “Our production departments considered several options to meet our requirements and that of our employees. Several training programmes were considered but an Apprenticeship Programme ticked all the boxes.”

The Apprenticeship Programme has been running for three years and has recruited 28 apprentices, 10 of which entered in the past 12 months. A further three have been taken on by BBC Wales Sport and Interactive departments.

“The outcomes of the scheme have been clear. Apprentices have a way into the highly competitive industry while learning key skills, providing an alternative to going to university. The BBC has a creative and dynamic workforce training to high standards that ensure the output of our programmes reaches the quality we and our audiences expect,” added Mr Morrey.

Deputy Minister for Skills and Technology, Julie James said: “Apprenticeships are one of the most practical and cost effective ways for a business to build a skilled workforce. An apprentice can learn the skills an employer needs to keep pace with developments in their industry and deliver the service customers demand. I am delighted that employers like BBC Cymru Wales share the Welsh Government’s commitment to training our future workforce.”

More than 400 key stakeholders from the vocational education and training sector across Wales attended the high profile awards ceremony, where guests dined out with chefs from the Culinary Team Wales.