Welsh employers to be asked to co-invest in apprenticeships 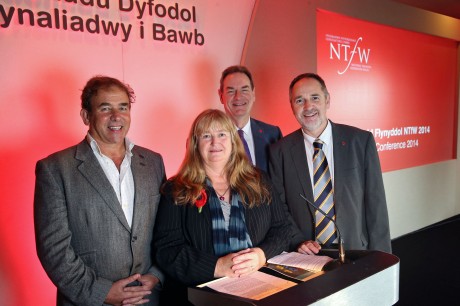 A work-based learning landscape influenced by diminishing Welsh Government funding support for post 25 apprenticeships and a need for co-investment by employers was painted at a major conference.

Deputy Minister for Skills and Technology Julie James told delegates at the National Training Federation for Wales’ annual conference at the Celtic Manor Resort, Newport that the current level of government support for apprenticeships was unsustainable given that the Welsh Government’s budget has been cut by 10 per cent in real terms since 2010.

“We have to take responsible action on skills investment, there’s no way around it,” she said.
“The most sustainable route forward for apprenticeships has to be for Government funding to be directed towards its priorities, particularly young people and those following a higher apprenticeship.

“It will be for employers to step up to the plate to help support the learning costs of apprentices who do not fall within Welsh Government priority groups.

“The Welsh Government has secured £2 billion of European Structural funding over the course of the next six years, which we are very pleased about. Work-based learning programmes will continue to benefit from this injection of funding.

“Nevertheless, it will become increasingly harder over the coming years to secure significant levels of skills investment for those non priority groups. We have to share this responsibility, between the Welsh Government, employers and the individuals themselves.”

Worryingly, the conference, themed ‘Building sustainable futures for all’, heard economist Professor Brian Morgan, a Cardiff Capital Region board member, reveal that 40 per cent of Welsh employers are not investing in training – the worst record of all the UK’s countries.

He questioned whether a levy on companies, similar to that imposed in the construction sector, could be introduced to ensure co-investment by employers in apprenticeships.

Arwyn Watkins, the NTfW’s chief executive, called for the Welsh Government to clarify the level of co-investment required from employers and warned that delaying an announcement could create a vacuum.

“If moving to a co-investment model is unsustainable in the short to medium term, then be clear on this so that alternative discussions can be had with employers around the skills and outcomes that they value and are prepared to invest in,” he said.

“We know that for some sectors without Welsh Government investment, the programmes for learners over the age of 25 will be in difficulty and the sooner that we have the debate on this, the better for all. We all recognise that some decisions are difficult to make but no decision is an even worse outcome.”

He said NTfW members must prepare for a cultural shift away from unsustainable programmes that were supply-driven to those that are demand-led with the employer at the heart of the process.

With investment from the European Social Fund set to diminish in the future, he told the conference: “We have to maximise the existing opportunities and start to reduce the level of funding support so that by the end of the journey we are not faced with the skills system in Wales falling off a cliff.”

The deputy minister commended the achievements of training providers. “Without doubt Wales is leading the way regarding skills and apprenticeships, not only in the UK but across Europe,” she said. “This is through the collective efforts of training providers, colleges and employers to deliver the very best standards of excellence for our learners.”

Mr Watkins urged Welsh Government officials to work with the federation more urgently to identify ways to reduce bureaucracy surrounding work-based learning programmes. “Where bureaucracy is unnecessary, let’s remove it so that taxpayers’ hard-earned money is spent where it’s most needed – on the learners rather than administration – to make work-based learning much more sustainable for everyone,” he said.