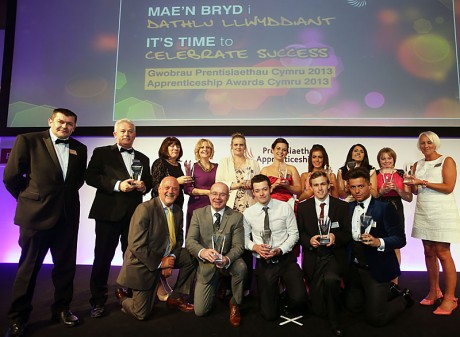 The prestigious Apprenticeship Awards Cymru brought together the cream of learners, employers and training providers across Wales, who have shown total dedication and commitment to skills development and business improvement.

Showcasing excellence in skills development in Wales, the awards were organised by the Welsh Government in partnership with the National Training Federation for Wales (NTfW) and sponsored by Pearson with support from media partner Media Wales.

The awards recognise the outstanding achievements of learners, employers and providers that have exceeded expectations and demonstrated enterprise, creativity and a real commitment to improving skills for the benefit of the Welsh economy.

Apprenticeships are at the heart of business effectiveness and provide talented people who have the skills needed for employers to prosper and compete. The Apprenticeship Programme is funded by the Welsh Government with the support of the European Social Fund.

Arwyn Watkins, NTfW chief executive, said: “The award winners and finalists are excellent examples of a partnership approach to skills development in Wales by employers, apprentices, training providers and the Welsh Government working together to deliver a high quality workforce.

“I commend both the Welsh Government for its continued commitment to apprenticeships and the NTfW network for continuing to deliver high quality work-based learning programmes that have put Wales in the premier league. The Apprenticeship Awards Cymru are a critically important showcase as we strive to achieve parity of esteem between vocational and academic learning routes.”

Airbus Operations Ltd, one of the world’s largest aircraft manufacturers, which has its wing manufacturing plant in Broughton, Flintshire, was a double winner at the awards ceremony. The company won the Macro Employer of the Year and employee Alex Birbeck, 21, collected the Higher Apprentice of the Year award.

The Apprenticeship Programme at Airbus is the cornerstone of its skills strategy, with excellent talent retention and development ensuring one of the world’s leading manufacturers of aircraft has a highly skilled workforce. The business employs 350 apprentices and continues to lead within the sector.

Alex from Buckley, has recently completed a Higher Apprenticeship in Engineering and has set his sights on a Degree in Aeronautical Engineering. He has made personal contributions to projects such as Long Range Design, where an engineering solution was needed on an A330 aircraft wing set.

Maes Manor Hotel, Blackwood, which has achieved its objective of increasing morale and productivity since establishing an apprenticeship programme nearly two years ago, took the award for Small Employer of the year. The hotel now employs 10 apprentices.

Chepstow business Mabey Bridge Ltd, which launched its Apprenticeship Programme eight years ago to ensure a steady supply of fabricators into the successful business, was named Large Employer of the Year. The company, which employs employing 600 people, is one of the world’s leading specialist suppliers of quality steel bridging, infrastructure, wind turbine towers and heavy plated structural steelwork.

After being runner up last year, it was Bridgend-based ISA Training’s turn to be in the spotlight as the company was named Apprenticeship Provider of the Year. The largest independent hairdressing and beauty training provider in Wales, the business has grown turnover tenfold to £3.5 million in the past 15 years and has increased learners from 100 to 800 plus and the number of employers it works with from 35 to 400 plus.

Newport-based Acorn collected the Provider Award for Social Responsiveness. Vulnerable women from ethnic minorities, refugees, people working in the community and teenagers with special educational needs are among more than 1,000 learners that the company has helped to complete learning activities over the last year.

Hairdressing entrepreneur Nick Petrakis, 27, who won the Foundation Apprentice of the Year award in 2012 for his truly inspirational story, added another trophy to his collection after being named Entrepreneurial Apprentice of the Year. He has realised a lifetime ambition by opening a successful salon, ‘nickymichaels’ in Cyncoed, Cardiff.

Determined April Davies, 21, from Dolfor, near Newtown, who has become a role model for young women seeking a career in the male dominated farming industry, won the Apprentice of the Year. From a non-farming background, she found she was the only girl on her work-based learning course but now works for Dairy Dreams and Common Piece Farm, Churchstoke.

The Foundation Apprentice of the Year award went to Paula Blundell, 40, a mother of one from Bryn-y-Baal, near Mold, who has proved it’s never too late to learn. She works as a teaching assistant and midday superviser at Ysgol Mynydd Isa and says completing a Foundation Apprenticeship has opened up a new world to her.

Dominic Evans,18, who is more used to working behind the scenes as a trainee chef at the Celtic Manor Resort, Newport, found himself in the spotlight as the winner of the Traineeship Learner of the Year (Engagement).

Lucy Price, 17, who works at TH1 hair salon in Bangor, where she is recognised as an outstanding employee with real potential to progress further, won the Traineeship Learner of the Year (Level 1) award.

Ffion Malwala, 24, a graduate who moved from Cardiff to Prestatyn to pursue her career in graphic design with Daydream Designs, won the Jobs Growth Wales Outstanding Achiever of the Year award.

Nicola Sanigar, 35, a mum-of-four from Barry who has gained childcare qualifications and secured herself a job at Daisy Day Nursery, won the Steps to Employment Learner of the Year award.