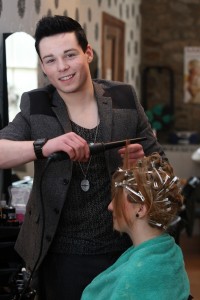 A young apprentice has been plucked from the South Wales valleys to work for celebrity hair stylist Nicky Clarke at his exclusive Mayfair salon in London.

Bradley Robinson, 17, sent off his cv to Nicky Clarke Salons who were so impressed that they invited him for an interview last Friday and immediately created a job for him, which he started on Tuesday.

It has been memorable few months for Bradley, who previously worked for Hair On Harper, Abersychan. He beat hundreds of rivals to win the high profile Jamie’s Apprentice competition on ITV 1’s This Morning programme earlier this year.

He breezed through five weeks of live challenges, including creating a 1950s vintage hairstyle, a romantic haircut and tribal hair creation. His highlight was creating a stylish hair up-do for Melinda Messenger, who was thrilled with the result.

Attracted by London’s bright lights after his brief taste of stardom, he was keen to return to the capital to build his career. “I’ve worked in a salon environment since I was 12,” he said. “I love the whole salon experience. Being able to transform a person with a pair of scissors is amazing.”

Bradley has been doing a Foundation Modern Apprenticeship in Hairdressing with Bridgend-based ISA Training since leaving school. His mentor since the age of 12 has been his best friend’s mum, Clare Jones, owner of Hair on Harpers, who expressed mixed emotions at seeing Bradley leave.

“Obviously, I am really sad to lose him because he’s like a son to me,” she said, “but it’s a chance of a lifetime for Bradley and he has to take it. He’s such a talented lad and has such drive for a 17-year-old. He has wanted to work in London ever since winning Jamie’s Apprentice.

“His first day in the Berkeley Square salon on Tuesday went brilliantly and he met Nicky Clarke on Wednesday. He has two training evenings a week and they also do a lot of session work, which is very exciting for him.

“All my clients are really pleased for Bradley and have been bringing in cards for him. I’ve told him to remember me when he’s rich and famous.”

Bradley has already met up with another young Welsh hair stylist and former apprentice, Josh Rees Hole, 23, who works at Urban Retreat, the salon at Harrods store in London. Josh was named Young Welsh Apprentice of the Year in 2009 after completing his apprenticeship funded via the Welsh Government with the support of the European Social Fund.

Deputy Minister for Skills, Jeff Cuthbert, said: “Congratulations to Bradley for securing this post. His rapid progression in the profession shows just how valuable an apprenticeship or vocational training can be. I hope this will be an inspiration to other young people who are considering taking up an apprenticeship.”

Shirley Davis-Fox, managing director of ISA Training, the largest independent hairdressing training provider in Wales, is delighted by the “fantastic” news about Bradley.

“Hairdressing is an exciting profession with many opportunities and by working closely with committed employers we ensure that every one of our learners reaches their full potential in the career they have chosen,” said Mrs Davis-Fox, Wales’ World Skills ambassador and vocational champion for hairdressing.