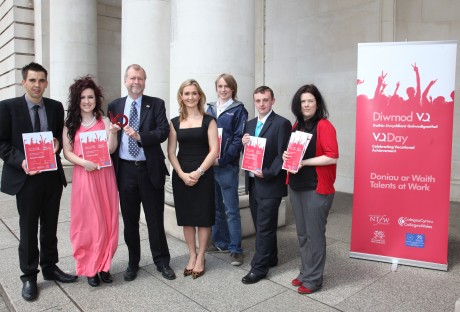 A chef who is working his way to becoming the youngest Michelin starred chef and a photographer who’s won an all-expenses paid placement with world-renowned fashion and celebrity photographer have been jointly crowned VQ Learner of the Year.

The two VQ Award winners, Luke Thomas and Melissa Jenkins, have a passion for their craft and a keen eye for business. They are talented, committed, entrepreneurial, and destined to go far.

He was crowned Springboard Future Chef of the Year 2009 and has since secured placements at some of the best rated restaurants in the world, including two and three Michelin-starred restaurants in Denmark, USA and the UK. He’s worked alongside some of the most famous faces in food including Heston Blumenthal, Gary Rhodes and Gordon Ramsay and cooked for none other than Prince Charles.

Luke has even secured his own personal sponsorship to travel around the world learning new culinary skills. His next port of call is Dubai, where he plans to hone his seafood skills. He plans to open his own top-quality establishment in the next two years.

Astonishingly, he has achieved all of this and is still only 17.

Luke Thomas said: “I am delighted to win this award and it just shows what can be achieved once appropriate vocational qualifications are gained and with hard work along the way.”

Melissa Jenkins, 21, from Ogmore Vale, is having a memorable year. Just a few days ago she learnt that she has graduated with a first class honours degree in photography. Earlier this year, she was named Nikon UK Student of the Year Foundation Award, one of the most high profile awards that any final year undergraduate student can win open. Her prize is three months’ paid employment plus living expenses for London and top of the range Nikon equipment to work as a photographer’s assistant to renowned fashion and celebrity photographer John Wright.

Melissa’s photographs have been featured in national magazines including What Digital Camera? as well as a 10 page feature in the international lifestyle magazine Sublime.

Now, she is setting up her own freelance fashion photography business and shooting top fashion designers’ new collections for London Fashion Week.

Melissa Jenkins said: “I’m still in shock but absolutely ecstatic to win such a prestigious award. I am in awe of the talent displayed at the ceremony and feel honoured to be a part of it and even more so, to be chosen as a winner!”

“Vocational qualifications can provide a solid foundation to a rewarding career across the whole range of economic sectors. They provide not only the underpinning knowledge needed for the relevant employment sector but also build practical skills, business skills and help forge business contacts.

“Congratulations to all the VQ finalists and winners. Wales delights in your success.”