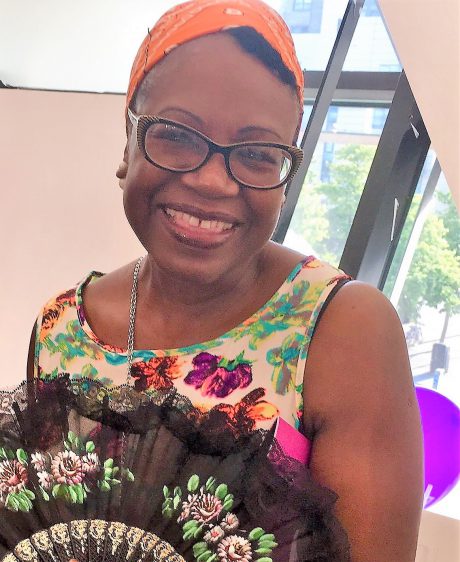 “I’m quite tenacious and don’t back down from a challenge.” That sentence perfectly sums up Humie Webbe, who has been chosen by the Black History Wales-wide network in the top 100 brilliant African Caribbean and African Welsh people who have helped shape Wales.

The list is supported by the Black History Committee to mark its Black History Month theme during October – “Icons of Black Wales”.

This year is also the 70th anniversary of the Windrush arrivals from the Caribbean, which is very significant for Humie, as her parents were among those who travelled to Wales from St Kitts in the 1950s.

Having been named in the Western Mail Power list as one of the 1,000 most influential people in Wales in the year 2000, she is now proud to have made the top 100 black Welsh people.

“I feel honoured and privileged to be on that list,” said Humie, who lives in Cardiff and is the strategic equality and diversity lead at the National Training Federation for Wales (NTfW).

“It’s such a special recognition because we were nominated by our peers. There are a lot of black people who are doing great work in Wales and many are not on the political radar.

“I have done a lot of work with the Third Sector in Wales and tried to use my position to improve people’s understanding of political engagement and how to make their voices heard.

“I was born a bolshie person and always questioned everything as growing up. So much so, that my mum often said she didn’t know where I came from!”

Humie is passionate about her role with the NTfW which, in essence, is to encourage more people from Black, Asian and Minority Ethnic (BAME) communities and those with disabilities in Wales to engage with Apprenticeships.

The person to turn to if work-based learning providers have any questions about equality and diversity, she is working with them to develop their strategic plans and improve the connections with BAME communities and people with disabilities.

“My role is to work with providers to show incremental improvements in their equality and diversity numbers,” she explained. “They know what they have to do but sometimes don’t have the confidence to apply the knowledge and don’t connect to under-represented groups as they should. There is a real desire to do better.

“Providers are prioritising their commitment to equality and diversity. They recognise that more needs to be done and are putting in place plans to address that.”

In her role, Humie has organised Apprenticeship engagement events working in conjunction with community groups and the Department of Work and Pensions and Job Centre Plus who have badged the events as ‘Apprenticeships for Everyone’ to further promote the all age Apprenticeship Programme and highlight the support available for learners.

She has found that many people in BAME communities are still unaware of the variety of Apprenticeship opportunities available to both men and women.

She is also working with schools to promote the benefits of Apprenticeships to pupils. Encouraging women and girls to choose Apprenticeships associated with science, technology, engineering and mathematics (STEM) subjects is another of the challenges she is tackling head on in partnership with Chwarae Teg and Women Connect First.

Humie joined the NTfW in 2016 from Mind Cymru where she was national diversity co-ordinator for the Time to Change Wales campaign, which aims to change attitudes towards mental health. Now she is encouraging learning providers to sign up to the Organisational Pledge and develop mental health action plans.

“I aim to celebrate the opportunities that Apprenticeships present to people from diverse backgrounds, particularly those from disabled groups,” added Humie. “I am utilising the networks that I have built over the years and using my experience, knowledge and engagement skills to make the Apprenticeship offer more attractive to everyone.

“With increased Welsh Government scrutiny on Apprenticeships, providers are going to have to demonstrate what they are doing to increase diversity numbers. There are some excellent examples of what has been achieved.

“We have to do something quite radical to increase numbers but changing people’s attitude and behaviour is a long-term investment.”

Born a twin – her sister Sondra is a nursing consultant in North England – she has six sisters and a brother, Glenn, a former rugby player capped 10 times for Wales in the 1980s.

She combines her important work for the NTfW with caring for her 30-year-old son, Saul, who has high functioning autism and her father, who has dementia.

“I have always had to speak on Saul’s behalf to ensure that he has the right support in place,” explained Humie. “That’s what draws me to organisations that are trying to make changes, whatever that might be.

“Growing up, my parents were really good at supporting anything that we wanted to do. Now it’s my turn to support my father. It’s hard work but working with Third Sector organisations has given me the strength and know how to get the best possible support. The NTfW has been brilliant with me and that makes it easier to do my job.”

Humie has worked in the public and community sector for almost 30 years and has devoted her time to championing disadvantaged groups, in particular BAME and disabled people, to have an effective voice to improve services and opportunities.

Prior to joining the NTfW, she worked for Cardiff Council and Welsh Government as operational manager of Cardiff Communities Frist Programme where she established partnerships in the most deprived areas of the city.

A founder member and former chair of Black Voluntary Sector Network Wales, she steered the organisation to obtain regular funding from Welsh Government. She was also the autism strand leader for All Youth Matters, a youth charity in the Vale of Glamorgan and development manager for ProMo-Cymru, which supports youth enterprise.

Humie is also an award-winning performer, educator, events and project manager. Her vocals were featured on the Oscar-nominated animation Famous Fred and in 2002 she received a Welsh Diversity Award for Best Achievement in Performing Arts.

Humie’s advisory roles include the Creative and Cultural Skills Sector Advisory Group, Equity ULA as part of the CULT Cymru Union Learning Advisor network and national adviser for the Arts Council of Wales. She is part of Women Connect First mentoring project Celebrating Women in Wales as one of their identified Inspirational Women.

To find out more about how Humie is helping address the needs of community organisations and individuals looking to access the Apprenticeships Programme, contact her on 07557 051329 or email humie.webbe@ntfw.org