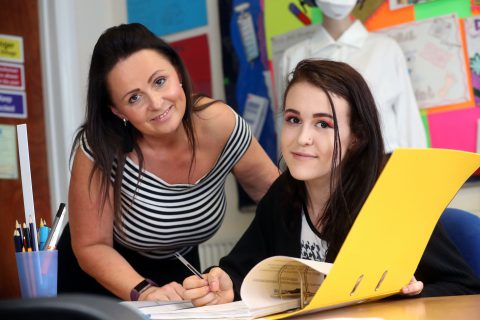 Mariska Hutton has overcome barriers in her life.

A young woman who has overcome many barriers and challenges in her life has used the Welsh Government’s Traineeship Level 1 programme as a springboard to launch her on a career path.

Mariska Hutton, 20, Twynwroddyn, Merthyr Tydfil left school with no qualifications but has successfully completed the Traineeship together with a NVQ Level 1 Certificate in Retail Skills through training provider PeoplePlus.

The qualifications helped her secure a retail placement with the British Red Cross in Merthyr Tydfil, which she hopes will lead to a full-time job.

Now Mariska has been shortlisted for this year’s Apprenticeship Awards Cymru. She will be competing to become Traineeship Learner of the Year (Level 1) at the prestigious awards ceremony at the Celtic Manor Resort, Newport on November 9.

Not long after moving to Wales, she became depressed due to bullying at school and the breakdown of the relationship with her adopted mother. Due to long spells of anxiety and depression following the breakdown in family relationships, she has been unable to hold down a series of jobs.

She was introduced to PeoplePlus by a friend and began an engagement programme in January this year, gradually building confidence and making new friends.

“I have worked hard over the past year and half to make my life better,” said Mariska.
“When I started at PeoplePlus, I had been through some bad experiences and was suffering with anxiety and depression. With the support of staff, my confidence has grown and I am hoping to get a full time, paid job.”

HerPeoplePlus tutor, Carol Williams, said:“Mariska is a confident, caring and hardworking young lady who has overcome many challenges and barriers in her life but has never lost her drive and ambition to better herself.”

Congratulating Mariska on being shortlisted for an award, Minister for Welsh Language and Lifelong Learning, Eluned Morgan said: “Apprenticeship Awards Cymru showcase the success of the Welsh Government’s Apprenticeships and Traineeships Programmes and the achievements of our star apprentices, employers, learning providers and trainees.
“Apprenticeships are a great way for individuals to gain valuable skills and experience while earning a wage and for employers to ensure their workforce has the skills to future proof a business.
“Increasing higher level skills and developing skills pathways that benefit the whole of Wales have never been more important.”