Eighteen-year-old Joshua Jenkins, whose dream of becoming a chartered engineer has got off to a perfect start with a string of distinctions from Coleg Cambria, has been shortlisted for the Foundation Apprentice of the Year award.

The ambitious Connah’s Quay teenager is one of 36 finalists in 13 categories at the Apprenticeship Awards Cymru 2013, organised jointly by the Welsh Government and the National Training Federation for Wales (NTfW). 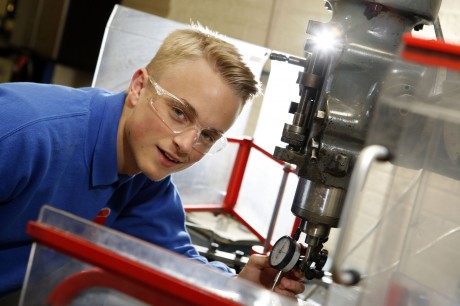 The winners of which will be announced at a high profile awards ceremony at the Celtic Manor Resort, Newport on Friday, October 18.

Joshua has just completed the first year of a Foundation Apprenticeship with integrated mechanical and electrical engineering company DRB Group on Deeside. He spent the year at Coleg Cambria where he also achieved the Welsh Baccalaureate, which included organising a charity walk and bike ride to raise money for the British Heart Foundation.

The remaining three years of his apprenticeship will be spent with DRB Group with one day a week at Coleg Cambria. “The apprenticeship consists of both practical and academic elements of learning and has placed me firmly on the route for a learning experience of a lifetime,” said Joshua.

The skills gained through the first year of his apprenticeship have given him the confidence to give lectures to other students, external groups and businesses. He also acted as mentor to budding engineers from Flintshire schools at a Year 9 Engineering Challenge at Coleg Cambria.

“Once I have completed my apprenticeship, I hope to carry on gaining more experience and qualifications throughout my engineering career,” added Joshua. “My ambition is to become a fully qualified chartered engineer.”

He said winning the Foundation Apprentice of the Year would be his greatest personal achievement and would be another step along the road to becoming a professional engineer.

The other Foundation Apprentice of the Year finalists are Ashley Jones from Llanelli and Paula Blundell from Bryn y Baal, near Mold.