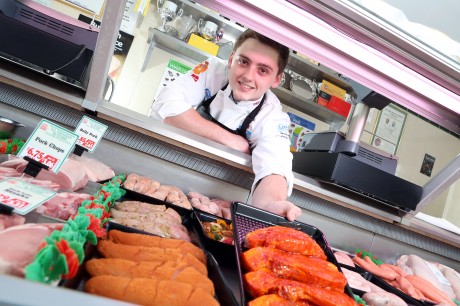 Matthew Edwards seeking to add to his awards

Talented Welsh butcher Matthew Edwards has already proved that he’s a cut above the rest by winning the Welsh Young Butcher contest and being selected to represent Great Britain in a European skills competition.

Matthew, 22, who works for S. A. Vaughan Family Butchers, Penyfford, near Chester, is in training for the European competition in Switzerland in September. He gained his place in the two-man team after finishing runner up in The National Federation of Meat and Food Traders’ Premier Young Butcher competition last year.

His learning journey has won him a place in the final of this year’s prestigious Vocational Qualification (VQ) Awards in Wales. He is one of six finalists in the running to become VQ Learner of the Year at the showpiece awards ceremony on June 4, VQ Day, at Coleg y Cymoedd, Nantgarw.

VQ Day is a national celebration of people who have achieved success in vocational education in Wales.

Matthew is working towards an Apprenticeship in Meat and Poultry Industry Skills with Cambrian Training Company based in Welshpool, having previously achieved a Foundation Apprenticeship.

He began his career with a Saturday job at Swans Farm Shop, Treuddyn, Mold and went on to work for last year’s VQ Learner of the Year for Wales, Tomi Jones, of Jones’ Butchers, Llangollen.

Since joining Steve Vaughan he has won the Young Sausage Maker competition at last year’s Bpex Regional Roadshow and will compete in the champion of champions contest at this year’s event in Newark in October.

“Since starting my training I have gone from runner up to winning the Welsh Young Butcher competition and come runner up in the Premier Young Butcher contest, which shows the progress that I’ve made,” said Matthew. “I have developed my skills by learning on the job and by being given the chance to take part in national competitions.”

Trevor Davies, a training officer at Cambrian Training Company, said: “Matthew’s achievements in industry-recognised competitions are a true reflection of his talent and he has set a high benchmark for others to follow.”

Mr Vaughan added his praise: “Matthew demonstrates ambition and determination which is evident in his positive approach to his qualifications, competitive appetite and eagerness to learn.”

VQ Day supports the aspiration that vocational qualifications, which are not just for young people, should achieve parity of esteem alongside other educational routes.

Wales’ Deputy Minister for Skills and Technology, Ken Skates, wished the nine finalists success on June 4. “Vocational Qualifications are the gold standard in professional excellence and we must ensure they are recognised alongside academic qualifications for their value to learners and the Welsh economy.

“Wales has a real wealth of talented and committed people who have excelled in their vocational studies and VQ Day is a chance for us to celebrate their achievements. A VQ award is more than just an award; it’s a symbol of dedication towards your chosen profession.”